Before passing the second week of his assassination, the resistance has hit its blow in Shebaa Farms under the name of the group of Samir Al –Kuntar. The value of the process before searching in the size of the enemy’ losses which many want it a criteria, it has been completed within record time of preparation, and implantation, in the traditional area of any Israeli alert after expecting a response of the resistance, and within most crowded point with troops, points of observation, and full of verification, tracking, and eavesdropping tools, it’s choice in itself through putting a heavy bomb, which means an infiltration and the approaching of the resistance fighters to this point and a kind of an announcing a self-challenge by the resistance to achieve a goal that it is impossible in normal conditions, so how with the high alter condition. The point according to whom is acquainted with the details of its geographical coordinates is a juncture that connects the Lebanese territories with the Syrian and the occupied Palestinian ones, exploding an explosive charge in the Israeli patrol has a message of the ability of making its similarities when the resistance wants to continue the progress of its fighters from the gap which the bomb opens in the defenses of the occupation army and its equipments.

Certainly the experts of the resisting, military and security acts know generally that launching tens of missiles by the resistance toward the hills of Shebaa Farms and the fortifications of the occupation there to destroy the fortifications, burning, and igniting the fire was an act that does not need to be postponed since it attracts the attention more and occupies a big space in the news, but according to the Israeli it is a sign of the resistance’s sagging, a sign of weakness of the fighters’ determination, moreover a sign of the retreat of their capacities to break through, incursion, breaking the security networks and surpassing the defense lines, the protection, anticipation and the tracing, towards the most sensitive point in the Syrian -Lebanese borders with the occupied Palestine, all the way to the final gate before entering to Galilee.

The experts also know that the Israeli response is not related to the size of loses but to the analysis of the message which the resisting act bears, the message which bears an external act by the resistance against an Israeli diplomatic or a tourist goal means an acceptance by the resistance to grant its enemies the opportunity to consider its act a terror, and to give Israel a scoring political, moral and media point, so it is enough for the resistance to announce on the behalf of its leader that it’s right to determine the place, time and how, but it does not use of its choices but the most difficult, the most complex and the strongest in the content of his message to his enemy. The Israeli response is neither measured with the size of losses nor with the place of the process, when Israel wants a political investment for a process that targets a diplomatic goal, it does not respond just in order to give the necessary opportunity for the involvement, because according to Israel , it is more important than a response that makes it equal to whom has targeted it, when it had an interest it launched the war of 1982 against Lebanon under the pretext that it is a response of a process that it suggested that it targeted its ambassador in Britain who was proven that he was alive.

The security military message which the response’s process showed, said that it is a payment of unclosed account, and those who have put the explosive bombs in these most controlled circumstances are able to bomb tens like them, and able to send missiles from this point toward the occupied interior, moreover they are able to keep up with after bombing them by breaking into the closer sites of it. In linking the previous processes in the same geographical site, from the dual process along the Farms and Golan two years ago to the last process of Shebaa Farms, the processes of the resistance integrate, which the Israeli knows its meaning “Galilee is under the grip of the resistance when it wants” so does the Israeli dare to respond to the response of such kind?

The Israeli decided to be satisfied with the local bombard toward the hills that are near the area of the process, in a message saying that he accepted the slap, and does not want to go on in the test of the deterrence equation which the resistance has formulated, and proves its eligibility whenever it is under the test.

The new equation is a payment of unclosed account, and Galilee is under the grip of the resistance whenever it wants. 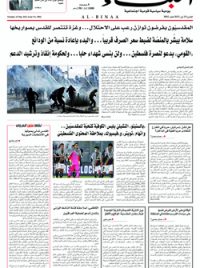