In his long emergence on TV, the head of the Lebanese Forces Samir Geagea wanted to promote the understanding with the General Michael Aoun which is based on adopting the nomination of the General for the presidency, so what was the result? Geagea said that he has accomplished what he has to do, now its Hezbollah’s turn which repeatedly announced that its stable candidate for the presidency is the General Aoun , and it is committed morally of that nomination, he added let us see if Hezbollah was honest in its nomination of the General Aoun or whether it wants a president for Lebanon.

We will start with the seriousness of Hezbollah, can we ask after what has happened with the nomination of the Deputy Suleiman Franjieh by the Prime Minister Saad Al-Hariri, the encouragement which that nomination found by the Deputy Walid Jumblatt, and the agreement by many parties of the allies of Hezbollah at their forefronts the Speaker Nabih Berri whether the refusal of Geagea of the nomination of Franjieh was the reason of disabling electing him for example, or is there any other reason that disabled the nomination and tried to re-present the nomination of the General Aoun as a political stability that changed the position of Hezbollah, since the nomination has what can avoid the sectarian engagement, Hezbollah has only to say that we accept the nomination so long as presenting the suitable guarantees for the General Aoun to bless that nomination, thus opening the door for negotiations in which Hezbollah offered lucrative conditions in favor of the General Aoun, such as the insistence on amending the defense law that allows the assignment of the Brigadier Shamel Roukoz as a commander of the army and granting the Free Patriotic Movement six or seven ministerial portfolios including the Ministry of Finance to the Minister Gebran Bassil, Franjieh has pledged to behave according to that the presidency is for him and the leadership to Aoun, above all an elections law that based on the relativity, so Hezbollah instead of doing that it said to all that the presidency is for Aoun, he is our candidate and we cannot ask him to withdraw , Hezbollah is doing that after a year and a half of the insistence on that either the presidency for Aoun or there is no presidency, so is anyone can ask it after all of that about the seriousness ?

Regarding the seriousness of Al-Hariri about the nomination of Franjieh, which means doing the best in order to make him arrive, the simplest novice in politics knows that the way for the arrival of Franjieh to presidency after the  “ conviction “of Al-Hariri is the formation of a mutual conviction with Hezbollah, depending on it in order to make a series of understandings in which the General Aoun is at their center and Franjieh a partner of them, while the Speaker Berri is their godfather in return of doing the parallel efforts Christianly from Bkiki to Meerab for the preparation and the support step by step , the direction here is not a technical issue and the production of presidencies on the way of nominating the Deputy Ammar Houri for the Former President Michael Suleiman has passed without return, Al-Hariri does not follow this path not out of  ignorance or a lack of consultants, but because he with all around him know that presenting the nomination in such a way will lead to complexities which are enough to exhaust him as a media step.

Regarding the seriousness of Geagea, what if he was serious? If he was serious he would say that the nomination of Aoun by the Lebanese Forces will be through the awareness of the Forces of his choices, his contrary local, regional, and international alliances, moreover there is no doubt if the General Aount calls Hezbollah to withdraw its fighters from Syria or to give up its weapons, The group of the Lebanese Forces sees the General Aoun a qualified candidate to have its support as he is, from his site and his choices because it trusts his national sovereignty identity, his characteristics, his nobility, his keen, and his respect of the Constitution, this is enough, but  not to talk about an original copy and a Taiwan copy of the team of the Eighth of March in an offensive ugly way against the General Aoun, and not to say that the understanding has built on mutual principles and a worksheet that constitutes a guarantee for the Lebanese Forces suggesting the  relationship of the General Aoun with Hezbollah, then to wonder whether Hezbollah thinks that it has taken the General for granted?

If Geagea was serious he would continue that from the site of the awareness of the characteristics of the General Aoun through his choices and alliances, we are in front of a candidate that has two allies to nominate him one from the site of the convergent choices which is Hezbollah and one from the site of the different but the confident it is the Forces, this is a good opportunity to promote the nomination internally, regionally , and internationally till ensuring the arrival of the General to Babda as a president, Here Geagea admits that the nomination of Aoun by Hezbollah makes the mission of promoting more difficult for Geagea, and that the nomination of Aoun by Geagea makes the mission of promoting his candidacy more difficult for Hezbollah, he added that overcoming these obstacles is possible, the Forces can tell their local, regional and international allies since they are a main player among their allies that we know ourselves and since the presidency is a Christian issue as it is otherwise, but it is their right from their allies to accept his nomination of Aoun after considering the privacy, knowing that the awareness of that the acceptance of Al-Hariri and Jumblatt will be less than the acceptance of insuring the quorum that requires a negotiation and an exchange of  guarantees. Geagea said I want to be clear neither me nor the General want a presidency with half of the Lebanese while the other half feels that they are obliged as it is a defeat for them, so we are ready with what we have of a mutual trust with our allies in the interior and exterior to present to the others all the clarifications and the guarantees of coordination with the General Aoun in order to remove their concerns and to meet the acceptable limit of their needs , so why Geagea has repudiated of each mission toward his allies and considered that he has done what he has to do?

If Geagea was serious he would tell Hezbollah that he could easily bring his allies to elect the General but he knows that the matter is not like that, he knows the magnitude of provocation which his speech includes that makes the mission of Hezbollah with the allies more difficult and complicate, so is this what he wants ? to facilitate the mission or to complicate it, the facilitation was to recall the contrary, the admission of Geagea of complicating the mission of Hezbollah in convincing its allies after the adoption of the Forces of the nomination of Aoun on one hand, and the nomination of Franjieh by Al-Hariri the ally of Geagea on the other hand, he admits that he is aware of the privacy of each team of the allies of Hezbollah, in addition the complication of the presence of a candidate who is ally to Hezbollah and its allies but he is supported by Al-Hariri the ally of Geggea who is Franjieh. He knows that as he cannot bring his allies to this choice easily despite the Christian privacy which gives him this feature which Hezbollah has not, Hezbollah cannot do that, he thinks that Hezbollah can break the obstacle; Franjieh by managing a dialogue of exchanging guarantees between him and the General in return of a similar dialogue runs by Geagea between the General and Al-Hariri. Geagea added that because we are aware of the blessing of the regional and international forces to ensure the success of the forthcoming president in his duty, the Lebanese Forces will try with its allies to say that the alliance of the General Aoun with Hezbollah does not form a disruption for his presidential task from a sovereignty position but it facilitates this task. So it is enough for Hezbollah to try with its allies to say that the adoption of the Lebanese Forces of this nomination does not weakening the choices of Aoun but it gives him in addition to the national legitimacy more of the Christian reconciliatory and legitimacy.

Geagea did not say anything of that but the opposite; it was enough to say that I am ready to facilitate the mission of the General, I will visit Bnashii personally, and I will talk with the Deputy Franjieh to choose the General and will ask for his support, moreover I will visit Tripoli and condole of the martyr the president Rashid Karami, away from accusation I will apologize from the decent honored family for any suspicion about my responsibility and my role in the crime. Geagea does not do or say no because he does not want, and it is enough for him to achieve the  gains of the nomination without making any effort to facilitate the arrival of the General to the presidency, because what is allowed for Geagea are these limits, while he does not have the decision of presidency; The limits of Geagea are the obtainment of factional Christian gains that make him reconcile with followers of Aoun allowing him to dream of a position of the leader that may inherit Aoun later  by removing the atmosphere of hostility and maybe substitute it with the gratitude, moreover the obtainment of an equation of comfortable parliamentary elections whether the General has arrived to the presidency or not, prevents the begging for seats for the Forces from his two allies Al-Hariri and Jumblatt.

Because Al-Hariri did not deal with the nomination of Franjieh only as how the Deputy Ammar Houri has dealt with the Former President Michael Suleiman , and because Geagea does not deal with the nomination of Aoun except in accordance with the equation that I have notified, Hezbollah has dealt seriously because it wants the arrival of Aoun to the presidency,  it wants to keep its ally Franjieh and because it wants a presidency not tricks of politics, so it abides the silence, it is aware that the presidency which the majority of the Christians feel that it has been gripped from them, even for an ally like Franjieh will not be safe as the presidency which the Sunnis and the Druze feel that it is a war project against them and that it will not be safe, and because it realized that the nomination needs to ensure the quorum which is the two-third of the deputies, but this is impossible without the major blocs, which means that the needed consensus will lead surely to a consensus president not an electoral competitive president, so let us wait for an understanding between the two deputies Aoun and Franjieh or between the nominators of these nomination Al-Hariri and Geagea  but they have to show the seriousness in the endeavor. 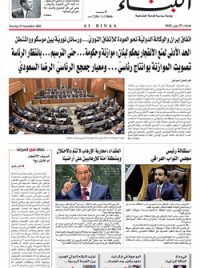