Those who know the personality of the Saudi Crown Crown Prince and the Defense Minister in the government of his father, the degrees of narcissism which controls him and the absurd bloodiness in his decisions taken daily to bomb the poor of Yemen in their vulnerable homes whether old people, women, or children know that he does not hesitate to ask for celebrating a death scene, which through it he can present his credits to the new US President who is superficial and narcissistic too and who is obsessed with the language of greatness, discipline, and reprimand to those who do not keep up with him, and where the US decision can involve him in a war due to an emotional debate with a president of an allied country so how with the opponents?.

Mohammed Bin Salman went to Washington under Israeli arrangement, preceded by understandings translated by Bin Salman by making Al Hodiedah his next destination in Yemen. along with the future of the Yemeni missiles for the negotiation. The two demands are Israeli that were expressed by Moshe Ya’alon with the beginning of the war on Yemen when he was the Minister of the war in the occupation government by saying that Eilat is at risk as long as Al Hodeidah is at the hands of Al Houthis and as long as the Yemeni missiles arsenal is safe and secure.

Yesterday Ya’alon attacked the Turkish President Recep Erdogan and accused him of the seeking for a new Ottoman which till yesterday it was desired ally to overthrow Syria, as well as the factions that are affiliated to the Saudi and the Israeli command rebel against Ankara’s demands to join Astana. The dispute is neither principal nor ideological nor political nor military about the goals and the alliances, but it is the logic of as you see me I see you, when Ankara thought about the approaching of the US-Russian understanding it sought to meet it without its Israeli or the Saudi allies in the war on Syria and has led to the settlement of Aleppo, Moscow’s meeting, and Astana path with the partnership of Iran. Therefore the strategic enemy of Tel Aviv and Riyadh by the logic of the interests is as the Kurds according to the Turks.

When the Turks reached to the certainty of the US reluctance of accepting their sweep with the Kurdish expansion they returned to Moscow and Astana and asked from their groups to go, they got used to the idea of the regression of the contrived campaign against Iran which they did for the sake of America, hoping to please him in exchange of the Kurds, they decided to keep the security issue from the Kurdish gate a ceiling for their Syrian movement, so there were no commons between them and the allies who do not want to harm the Turks. but they do not mind to say in front of the American “ our ally has a privacy and has its own speech and we have our own privacy and speech”  and if its dominance in the northern of Syria then the south will not be a subject of the Turkish calendar.

Bin Salman goes with the blessing of Israel to say that we will continue the war in Syria and Yemen on Iran and its allies, we have the capacity to withstand so do not dash to the settlements, wage the battles against ISIS in the northern of Syria with the cooperation of Russia or without it, with the cooperation of Turkey or without, it belongs to you, but the most important thing is that the cost must not be a full settlement for all of Syria that legalizes the victory of Iran and its allies. The temporal alliances are enough for the war on ISIS, since ISIS has not any notable presence in the southern of Syria but Iran and its allies; the Syrian country, then Hezbollah, and then the present advisers and allies; those form a danger to Saudi Arabia, Israel, and America. When there is a settlement that confines the Iranian influence with what pleases America then it is a settlement that pleases Saudi Arabia and Israel.

The bombings of Damascus and the reluctance of going to Astana say that the Turkish command on the armed groups ends at the borders of the northern of Syria, then the Saudi and the Israeli command starts, it waits for the US sponsorship, so the bombings made by their two suicide bombers who sought for a goal to bomb themselves in, because the timing is important since they were notified from their operators that the paradise is waiting for them today. Here is the celebration of the remembrance of “the revolution” that is offered by the “guide of the revolution” Bin Salman and is blessed by Ya’alon to the rebels who announced one day that they went out seeking for civil peaceful multilateralism Syria. 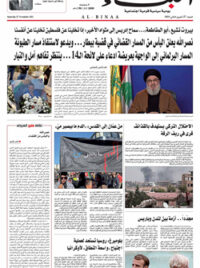