Since the beginning of the international and regional efforts for a political solution in Syria, the magnitude of the roles of the regional and the international allies of the Syrian two opposite teams, the country, and the formations of the political and the military opposition groups reflect the outcome of the field balances of powers between these two teams on one hand, and the ruling balances of the international and regional equations and its variables on the other hand. At the beginning of the efforts was Geneva Statement in 2012 where Iran was absent, or more exactly it was excluded, while the presence of the hostile allies to Syrian country was dominant, until almost the presence of Russia and China was insignificant among this hostile crowd. This meeting which was held on May 20, 2012 has included each of the Secretary-General of the United Nations and the Secretary-General of the Arab League, in addition to the Foreign Ministers of the Soviet Union, Turkey, China, France, Qatar ( the Chairman of the Arab League to follow up the situation in Syria), Iraq ( the Chairman of the summit conference of the Arab League ), Kuwait ( the Head of the Foreign Ministers Council of the Arab League), the United Kingdom, the Northern Ireland, United States, and the High Representative of the European Union for Foreign Affairs and the Security policy) as working group for Syria led by the Common Special Envoy of the United Nations and the Arab League for Syria, the ratio of the friends of Syria to its opponents is three of thirteen, it means less than a quarter. The absence of Iran was not inadvertently, but it was a political decision.

At the meeting which was held after four years and a half on 20 December 2016 in Moscow and has included the Foreign and the Defense Ministers of Russia, Turkey, and Iran and which ended with a document for a political solution. The ratio of the friends of Syria comparing with its opponent is two-thirds; the absence of Saudi Arabia was not inadvertently, but it was a political decision.

In the negotiations of Geneva which the preparation for them was at the end of 2013 and which have been held in early of 2014 which mean exactly two years ago, the United Nations has sent an invitation to Iran after vigorous Russian interferences to participate in the opening session of the conference, then the Secretary-General Ban Ki Moon has withdrawn it. The Foreign Minister of Russia does not have but the objection and to accept the fait accompli to participate despite that provocation. It was issued a Saudi public statement to exclude Iran. On  January 20, 2014 the Saudi authorities announced that they refused the participation of Iran in “Geneva Conference-2-” which aimed to discuss the Syrian crisis, because Tehran has refused the item of forming a transitional government, because it has affiliated forces that fight with the Syrian regime. The official News Agency has reported the saying of an official source” the public approval on the invitation terms is by announcing officially and publically the acceptance of the terms, at their forefront forming a transitional government for the authorities, while Iran did not announce that position, so it was not qualified to attend, especially, because it has military forces that fight side by side with the forces of the regime.

In the preparation for the negotiations of Astana, Russia and Turkey have announced the desire to include new participants to sponsor the political process, among the concerned is Saudi Arabia. Iran refused the participation of Saudi Arabia, and has announced at the spokesman of its Defense Minister on December 28, 2016 that Saudi Arabia is not allowed to participate in the Peace Process in the Syrian Republic. The Russian media agency has reported on Tuesday that the statements of Dehghan have been issued during an interview with (Russia Today) the Russian TV Channel, It was reported that Dehghan said that the insistence of Saudi Arabia on the resignation of the President Bashar Al-Assad means that Riyadh must not participate in the Syrian future peace talks.

A year ago, when the Russian President Vladimir announced that he sent his troops to Syria to drop the slogan of overthrowing the regime and to impose an equation its basis is the priority of the war on terrorism, as well as a Syrian Syrian political solution through which the Syrians resort to the ballot boxes, many has mocked at his words.

Now after a year of his words the President Putin ratified on the first serious agreement to cease-fire and to start the political track among the important factions which are sponsored by Turkey in the fighting field. The Syrian government excludes ISIS and Al Nusra front, while Washington is absent from the scene, its President Barack Obama is preparing himself to depart after he defined several and repetitive deadlines for the departure of the Syrian President, he has warned Moscow repeatedly from the failure which it will reap because of its involvement in the Syrian war. The new President is preparing himself to assume power. He says that his priority is the cooperation with the Russian President, and that the issue of overthrowing the regime and toppling the Syrian President is not an issue that concerns the Americans, wondering why not to cooperate with him as long as our priority is fighting the terrorism and he is fighting the terrorism. 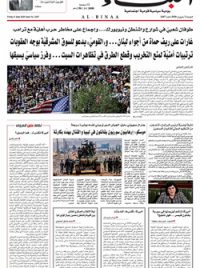