There is an opportunity for reading, evaluating, and taking lessons from the day of victory, with which one of the rounds of the open historic confrontation between the resistance and the occupation entity ended, especially after the results which became resolved during the largest wars of the century which took place in Syria and where the resistance was in its heart as a goal, role, and fate. It is one of the rounds of confrontation which has not ended on August 14th 2006, but it can be said that the war on Syria was its severest successive round. That war tried to absorb the lessons of the war of July after five years of its end with a historic defeat of the occupation entity. Firstly through the preparation for a war that will last for years where the occupation entity will not be in the heart of attrition. Secondly, through the confrontation in the field between the resistance and an army that is comparable to the occupation army but exceeds the ability of the resistance to bear blood, namely Al-Qaeda organization in all its branches. Thirdly, through the mobilization of the western countries in this war and linking it with international strategic equations in favor of the western hegemony project to restore it after its recent failed wars and to make Syria; the castle on which the resistance is based” its target. Fourthly, through the distribution of Syria’s shares on the regional participants as Saudi Arabia, Turkey, Qatar, and the occupation entity which is the first winner whether the war will lead to a rule the is subject to the West and its groups in Syria or towards the division and the birth of a group of subordinate entities or at least disputing ones.

The outcome of the war on Syria as illustrated by the occupation entity, its leaders, and intellectuals says something that is similar to what they said after the war of July” the defeat and the failure” despite all the attempts of absorbing this failure and that defeat. This is similar to the bets accompanied the war of July 2006 about the Lebanese army and the resolution 1701 and the illusions of deploying UN observers on the Lebanese-Syrian borders. The occupation entity will not be able to avoid the fact that it received a strategic defeat in Syria after it tried to deny it in the war of July 2006. Therefore it tried to avoid the formation of commission of inquiry as Winograd, because the result will be disastrous if it confessed that it got a resounding defeat.

As an outcome, the bets of the occupation entity were unable to weaken the resistance ranks in its main fronts in the southern of Lebanon, or exhausting the resistance in Syria, or building a security belt on the Golan borders, or overthrowing Syria, dividing it distributing it, or turning it into a swamp of sectarian strife which anticipated by Israel. Now the resistance and Syria reaped the fruits of the major transformations which accompanied the victory, through an alliance with Russia which was not exist before the Syrian war and international and regional balances that their implications become clear gradually along with new Lebanese equations that will not be affected by the maneuvers of forming a new government after it was resolved by the elections of the President of the Republic and the parliamentary elections.

The two facts which were illustrated by the experience of the occupation entity with the resistance in terms of the readiness for a next war are shown in the fundamental difference between the resistance and the entity; First, the occupying entity is preparing itself for the next war inspired by the last war, but it was surprised that the resistance which it confronts was not that one which it faced in that war. While the resistance was preparing for the next war putting in mind that the occupation will be at its best condition but it discovered that it is below its expectations. This is the concept of the excellence in strategic time. Second, the occupation entity in every defeat loses some of its spirit while the resistance gains more trust and power. When the successive round takes place between two varying parties which become more differentiate during the confrontation and after it, it is proven that what is lost is not resorted and what is gained becomes more glowing in the following war, this is the concept of the excellence in the glowing spirit.

Any strategic mind which wants to get lessons and to draw a diagram for the confrontation that lasted over more than three decades between the resistance and the occupation entity and in which the resources, conditions, arenas, tools and the international, regional, and local atmospheres changed with the remaining of one constant “the ability of the resistance to achieve one victory after another” will say to the occupation leaders that “You try in vain, you are confronting people that are willing to wage a war of the next century with the mind and the tools of the next century, while you are thinking and preparing for the war of the past century, you have a soul that vanishes from one round to another, while on the opposite bank you are facing a soul that becomes more glowing from one round to another, so try to find exits, no matter how painful and costly they will, because they will be less painful and costly than the consequences of the next war. 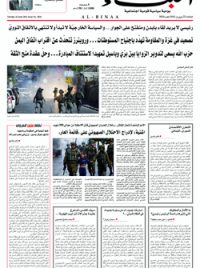