Wars are politics but by other means as Clauzwicz says, the war which Syria has witnessed is a confirmation of this saying, there is no war for the sake of war, because the wars of extermination have become from the past, and no one goes to war entitled let’s be upon me and upon my enemies, or that the revenge is better than nothing. When the wars reach to form equations that show the inability of achieving goals, the search begins for reducing the limit of ambitions, and the rashness towards forming platforms for negotiation and the diplomacy’s bridges, while the stubbornness becomes the exclusive characteristic of the foolish people who are late for grasping the appropriate moment for reserving a seat in the settlements. When some delay in reserving a seat in the wagon of settlements, they move from searching for a limit of minimum gains to a limit of minimum losses, and when everyone sit on their seats while one remains out, the train will take off without him or he has to buy a ticket at a higher price and sometime fancy price from the black-market. In all cases he will pay the cost of the bills of the losses of his allies who have already preceded him reserving their seats.

Washington’s allies especially Turkey, Saudi Arabia, and Israel did not pay attention when the American fleets returned from the Mediterranean Sea without waging a war against Syria that it is impossible to return back to wage such a war, and that the war which they said that they would not wage and they would not dare to wage without Washington has ended in its strategic meaning at that moment, as they did not notice that Washington after the decision of withdrawing its fleets and entering immediately in resuming the negotiations on the Iranian nuclear program, it decided to culminate the understanding on the political solution for the chemical weapons in Syria with the understanding on the Iranian nuclear program, ending the direct disengagement between it and the region’s crises in order to be an external force in these crises that has the ability to observe remotely and intervene where and when it should in politics, when the settlements become ready, otherwise lets the wars of attrition continue since they are not at Washington’s expense and not from its account, till its opponents and allies convince that the path of settlements becomes inevitable and unavoidable. Because it knows that the problem is not with its opponents who know what they want and they draw the paths of negotiation and settlements from Moscow to Tehran to Damascus, leaving its allies paying the cost alone till each one of them in his appropriate political time convince to join and on his own way. Till that time Washington will reap the fruits of the tactical gains which they achieve but leaving them paying the cost of the losses. No one of them has asked himself if Washington had any hope of adjusting the ruling balances of the war in its favor directly or without the mediation of its allies, then it would not have signed the understanding on the Iranian nuclear file but waited the changing of the balances.

When the first year of the negotiation with Iran ended and then the extension was for seven months ending in June 2015, Jeffry Feltman said that Washington wants this agreement and its needs it more than Iran, but it grants its allies enough time for positioning and having the papers which ensure for them better negotiating sites in the new regional map. Israel made the process of Al Quneitra in Golan to draw with the blood of the martyr Jihad Moughnieh and his friends a red line in front of the resistance, its content is that the equations of deterrence which rule the southern of Lebanon will not be applied on Golan, but when the resistance responded in the qualitative process of Shebaa Israel retreated and drew lines for its positioning opening to all the possibilities of the end of the Syrian war that range from the plan of the US Minister of Defense Ashton Carter by arranging a security belt for Golan from the armed groups where Al Nusra front is their center under the slogan of the war on ISIS and the attempt of fragmenting the bordered geography of Syria, they end with the French initiative for negotiations under the slogan of the Arab Initiative for Peace that leads to a state in Gaza that is shared by Ramallah Authority and the Government of Hamas Movement, it is guaranteed by the Egyptians, the Saudis and the Turks in particular, while the new Israeli positioning lines emerge to publicly by normalizing the relations with Saudi Arabia, and making bridges of economic normalization that have a role in the oil market and the trade of Gulf, where making the Egyptian islands Tiran and Sanafir Saudi islands was one of its preliminary steps.

After Israel Turkey moved towards igniting the northern of Syria and having control on Idlib and Jisr Al Shogour, in addition to having full control on Aleppo to the extent that the future of the war of the northern of Syria became determining the future of the war in Syria and the future of the Turkish role in it, but when the Russian military positioning occurred, The Turks have raised their limits towards the confrontation and was the dropping of the Russian plane and the announcement of the intention of a direct intervention that calls for  an area that extends from the Syrian coast till Jarablos that is near the area of Al Nusra’s control so it cooperates with its and protects it and being protected by it. The project of turkey has ended with rapid failure, after an attack and retreat, bets and waits the war in the north seems to have one destination, it is the destination of the Russian Iranian Syrian  intention to cooperate and to be integrated with the resistance on a military resolving that causes the fall of Al Nusra and the closure of the Turkish borders, so the well calculated gradual turning of Turkey is similar the signing of Washington on the understanding on the nuclear program, so as Washington realized that through this signing it accepted a solution in Syria that does not lead to a confrontation with Iran, otherwise it would wage this confrontation under the most important title which is the nuclear program, and it would not accept its legislation or making Iran achieving big financial economic political and moral gains as a result of this understanding. Turkey is aware that through this turning toward Moscow it accepts a solution in Syria that does not lead to confrontation with Moscow; otherwise it has waged the confrontation under the slogan of the national pride and would not accept the humiliation of apology and retreat.

The war of Aleppo is progressing and proving everyday that the media victories even when they based on facts relatively that get exaggerated, they got affected as balloons which soon return to their size once they collide with concrete object. It is clear that the path of the war of Aleppo is known by Turkey which was the cause of its turning, but even if it moved gradually and slowly there is a lazy pupil still outside and that the settlement in order to get matured needs him to ascend the train. It is known that the Saudi who is the last stubborn outside the train is waiting for the results of Aleppo which he inherited its war from the Turkish, but he is waiting more for the war of Yemen which he ignited from within the attempts of Washington’s allies to have control over the keys of power, and which turned into burning embers that the Israeli has sought to not be affected by it as possible. The Turkish is seeking today to make the Saudi bear all the bills of the losses which he will pay them from his presence and his importance on behalf of his role in the war, and on behalf of Washington’s allies since he is the last obstinate.

The Saudi obstinate faces its test in Yemen where the Yemenis are waging fierce battles in the borders of the Yemeni provinces which are occupied by Saudi Arabia as Jizan, Najran, and Asir. The Saudi army is paying daily many of the dead from his officers and soldiers, till the pressure of the losses has driven the Saudi Foreign Minister Adel Al-Jubeir to appeal from Russia to mediate with Al Houthis to stop the raids on Sanaa in exchange of their stopping bombing the bordered areas and going deeply in them, after the Russians have taken a firm position in the Security Council by preventing the passage of a resolution or a statement that condemns Al Houthis due to a Saudi request. Now it seems that the war of Aleppo and the war of Jizan are two scales of maturing the settlements and relieving the tensioned teams. 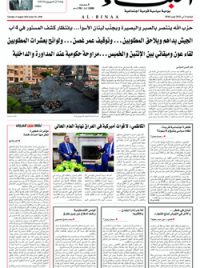