No one can believe what the Saudis have shown of external indifference towards the positions of not being blamed which the rulers Gulf countries have expressed toward the calls which they launched and spent costs in order to interact with them to break up their diplomatic relations with Iran. It is obvious that the Saudis have broken up their relationships with Iran because they thought that it will be a snowball that will grow toward imposing a diplomatic isolation on Tehran and returns it to the situation before signing the understanding on its nuclear program. Gulf rulers ensure that their governments have heard admonition, blame, and censure from Saudi Arabia for their being sufficient in issuing a statement of denounce for what the Saudi diplomatic mission has witnessed in Tehran, they were asked clearly to break up their relationships and to bargain them with alternatives when they insisted on not responding to Riyadh’s call, some of them have reduced the level of representation and some have recalled the Iranian ambassador to inform him about the protest, while others have recalled their ambassadors from Tehran for consultations. These steps are called in diplomacy the procedures of not being blamed, these were not certainly what Riyadh wanted from the governments that it has considered as its backyards, moreover the response of the beggar countries for the security of its rulers as Sudan, Djibouti or Bahrain was just the exact expression of the actual importance of Saudi Arabia after three decades in the Arab leadership.

The Saudis did not imagine that the outcome of their money, war, and their diplomacy will be anemic at the Gulf level to this extent, and at the Arab level at this humiliated level, but the most surprising for them was the position which was issued by the US Secretary of State and the Ministers of Foreign Affairs of Turkey and Pakistan, the Saudi consideration was at less estimation an announcement of the solidarity and to be sufficient with the condemnation of what has happened in Tehran and Mashhad without referring to the execution of Sheikh Nimr Al-Nimr through condemnation or dissatisfaction. Certainly it was not occurred in the imagination of Riyadh’s rulers that the governments which were considered as  supporters to it, announce that they feel disturbed to find the tension between two friend countries and that they are ready to mediate between them, thus Iran becomes the enemy which Saudi Arabia wants to mobilize the efforts and conditions against it, in an equal status of Saudi Arabia which sees itself as the spoiled son in Washington and a father that has a prestige among the rulers of Turkey and Pakistan.

It did not take too much time to discover the real goal of Saudi Arabia of this campaign which they have led against Iran, when it was appeared at the corridors of the Organization of the Islamic Conference a Saudi call to get rid of Iran; this has interpreted the Turkish and Pakistani refusal to participate in the track. Washington does not want to allow Riyadh to impose that on it, a track about the return to the understanding before the nuclear program with Iran, and before the UN resolution about Syria, thus was the American announced position sequentially, there is no influence of the Saudi Iranian tension on the date of Genève that is attributed to Syria. And that the special procedures about applying the understanding about the Iranian nuclear program will emerge to light respectively.

Saudi Arabia did not succeed in protecting its dignity as an old image in the memory, because it insisted on showing its new image, but the weakness which affected its prestige was shown, what is most important is that it did not succeed as well in stopping the tracks of settlements which included Washington and Iran about the nuclear program and which will lead within few days to the flow of one hundred and fifty billion dollars to the Iranian treasury. Above all it did not succeed in re-discussing the issue of the terrorist organizations in Syria, and neglecting what the Russians and the Americans have agreed upon regarding the armed groups which are sponsored by Saudi Arabia since they are terrorism led by the army of Zahran Alloush whom was grieved by Saudi Arabia and was considered a peaceful opponent on the day he was killed, thus Saudi Arabia did not succeed in reopening the debate about the status of the Syrian President Bashar Al-Assad in the future of Syria.

Saudi Arabia has lost the round; it seems that it is the last rounds of war. 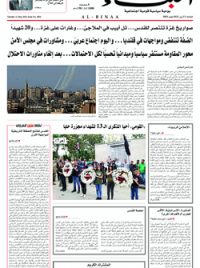