During many decades, the resistance was able to fill the gap between the capacitates of Lebanon which were zero on the eve of the Israeli invasion of Beirut in 1982 till now, it offered sacrifices till the liberation and the deterrence were achieved as shown in facts in 2000 and 2006. But what has been accumulated by the resistance was in the wars of ground under a sovereign decision to prevent the Lebanese army from possessing an air defense network according to the equation that it is forbidden to posses other than American weapon, at the same time America refrains from providing Lebanon with the air defense means, while it proposes its modern aircraft and its new sophisticated air defense missile to Turkey to prevent buying ones from Russia. It gets what it wants from Lebanon which is uncovered under sovereign decision without any cost.

The US Secretary of State Mike Pompeo knows as his assistant David Satterfield who came to Beirut for that purpose on the eve of the travel of the President of the Republic the General Michael Aoun to Moscow that Washington will impose more sanctions on Lebanon and will end the military cooperation with it if it the Lebanese army was supplied with non-American weapons as a Russian air defense network. The intention is not the source of the weapons rather the principle of Lebanon’s possession of defense means that prevent Israel from violating its airspace. So what such rudeness against the sovereignty? And what such tolerance from Lebanon towards these words?

It is understood that the Americans are aware that the protection of the Israeli aggression is their priority in the region, because this contributes in weakening the resistance alliance, as they are aware that going on in any settlement of the Palestinian cause according to the UN resolutions as a Palestinian state till the border of 67 that its capital is Eastern Jerusalem and the withdrawal from the Syrian and Lebanese occupied territories will lead to a different positioning by Russia and Iran in the equations of the region. This option is the only hope to weaken the alliance which defeated America and Israel and their allies in Syria, and will put the resistance in Lebanon in front of the question of the justification of possessing weapons, and will put Syria under embracing questions after the withdrawal from the Golan. The Americans know that the possession of the Lebanese army of an air defense network and deterrent missiles in case of aggression will impose new equations about the weapons of the resistance.  But Washington does not mind scarifying of all these opportunities to keep the aggressive Israeli superiority.

What are the justifications of the sovereignty’s claimers in Lebanon, who are hostile to the resistance and who obey what America asks for? What is the secret of the reluctance in confronting Pompeo and Satterfield “Treat us as you treat Turkey the member in the NATO, we will promise to obey you and to accept your offers even if the others’ offers are better, just because we do not master the policy of defending our sovereignty strongly and we fear your anger at least for face-saving, otherwise leave us!”

The concept of sovereignty is not a slogan that is accompanied with anger and raised against the brothers, and obscured when there is an enemy, we become ashamed of this word which you pretend to adopt “Sovereignty”! 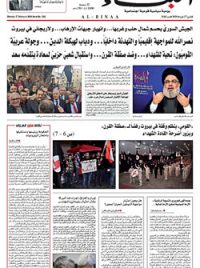