Saudi Arabia and Turkey have taken the first place in the regional scene during the five years, which are the age of the Syrian crisis which has culminated into Arab Spring, through which each one of Saudi Arabia and Turkey has shared its stages, its countries, and shared the administration of the war on and in Syria as periods of time and a geographical distribution of the fighting fronts as well as a responsible sponsorship of the armed groups. During these years Washington the only sponsor of the two governments has devoted the leadership of its politics in the Middle East for them despite the side roles of Israel and Qatar within the confine of Saudi Arabia and Turkey and with the cooperation of them. Within the system of the Turkish and Saudi cooperation and competition the intention was always in addition to the bet on achieving the gains on the engagement area which extended from the North of Africa to the Levant including the heart of the Arab world; Egypt and its outlet on the Red Sea and the Strait of Bab Al Mandeb in Yemen, there was an anticipation of the rising of each of Iran as a regional force and Russia as an international force that are looking for an advanced role at the same engagement area, where Syria has turned into a decisive square in all the wars of the world and the Middle East, and through it to a crucial point in the history of rising and the demise of the leadership roles of each of Turkey and Saudi Arabia.

After five years, Turkey followed by Saudi Arabia has failed to have control over Yemen, they have failed in Tunisia and now they are failing in Yemen and Iraq, and originally they have failed in Syria, they have withdrawn in front of the progress of Russia and Iran, now they are positioning behind the advancing lines that are drawn as red lines by Tehran and Moscow. The understanding on the Iranian nuclear program regarding lifting the sanctions on Iran has come into effect within the coming days. Saudi Arabia and Turkey have failed to disable it or to bargain upon it or to be a partner in it. The Russian authority on the administration of the war on terrorism in Syria is represented by the retreat of the US Secretary of State John Kerry of the adoption of the consequences of Riyadh Conference regarding the Syrian opposition, it dislocates as well the cover off the Saudi piracy in order to put the control over the issues of the opposition and the classification of the terrorism, and to resend them to Vienna Meeting which will be hold in New York. Kerry will be obliged to do that in a humiliated way with the confusion of the positions which will change within few days, this will make him admits at the end that the paying the bill for the Russian conciliation in Syria from the Saudi balance is inevitable after Russia had drawn by fire the limits of the field movements of Turkey in Syria from the closure of the crossings to the air embargo, while in Iraq he will admit of the Iranian referentiality, Saudi Arabia will be obliged to appoint two ambassadors in both Tehran and Baghdad, while Ankara will retreat of its stubbornness on keeping its troops inside the Iraqi territories, it is confused while it receives blows. In Yemen, the negotiations of Genève, the ceasing-fire and what was proceeded of effects across the Saudi-Yemeni borders, including Toshka rockets and their consequences, will prove for whom is the authority. In Lebanon the Saudi is gasping searching for a presidential candidate contrary to the candidate of the resistance and Syria, but he found only a candidate that belongs strongly to the team of the resistance and Syria.

What is left for Saudi Arabia and Turkey is just the media pretense of being clever, after the Turkish orgy by closing the Basphorous strait against the Russian ships and the refusal of taking back its troops from Iraq, now these troops are bleeding and after the insistence and the clinging to set a secure zone in the Northern of Syria the Turkish President has invented a project for a dialogue that includes him with Russia and Iran to discuss the regional situations, but he did find but an Iranian call to accelerate in taking back his troops from Iraq, and a Russian call to be ready to grant the compensation of the plane which he has dropped by his stupidity, while Saudi Arabia is inventing a phone alliance for the war on terrorism which only the Prime Minister of Lebanon has been entrapped, this alliance is to hide its defeat in Yemen, its failure in Syria and its moving towards relations of normalization with Iran, it has got a flagrant refusal from Pakistan as a result of its lean position, Pakistan the most important military country in the Islamic world which stands against Afghanistan front and which has been funded by Saudi Arabia for a long time, thus it surprised by inserting its name without knowing in the new alliance, Indonesia the largest country in the Islamic world has announced its refusal to join the alliance as well as Oman which is a member in the Gulf Cooperation Council  has refused to join too, in addition to Iran and its position in the Islamic world as well as Syria and Iraq and the meaning of their refusal as two war fronts against terrorism.

The media pretense of being clever is no longer useful to hide the defeat. 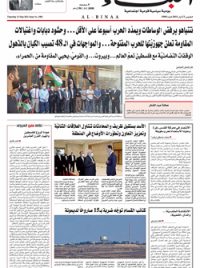