Maybe the linkage between the name of Syria and the name of the President Hafez Al-Assad and then the President Bashar Al-Assad can grant the right to some people to say that it is a diminution of homeland as Syria by linking it with the name of a person whatever his name is great and his status is high. It seemed before as a kind of sanctification of a symbol that gave his country a privacy that is related to his name, and a status that is difficult to obtain by any other person. The opponents would have also the right to link the dispute with the linkage between Syria and Al-Assad in order to show their Syria which can liberate from this linking to be more beautiful, greater, and bigger.

After the war on Syria, the matter is no longer how to conduct those who were recording their protest on this linking, since we saw their Syria which they foreshadowed that this linkage diminishes and devitalizes it, the reality has summarized their actual project of Syria through what the seculars, the clerks, and those who calls for Arabism offered, what is intended here are examples that have symbols in the formations, and figures that were at the top of the Syrian oppositions that were gathered under what they called the Syrian revolution and which led to the formation of emirates of killing and slaughter over the Syrian land, threatening its unity, selling its national independence, the abandonment of its Golan, turning it into a free land for the invaders and the ambushers, appointing the oil sheikhs through their ignorance and their remoteness from every freedom, democracy, and estimation of the rights of people as references in the jurisprudence of the revolutions in Syria  and the Syrians, and improving the image of Janissaries with a new Ottoman dress and the nostalgia of the French colonialism  with a democratic desire, so the example of “Syria of Al-Assad” has surpassed in the eyes of the simple people of Syria especially those who were believed in the lie of the revolution and now they mourn over  those days.

“Syria of Al-Assad” which we mean was built by the President Hafez Al-Assad and was under the auspices of the President Bashar Al-Assad, it is Syria which gave the priority for the building of the strong country supported with freedom and democracy, it expanded the contribution of the country in bearing the burdens of the livelihood of its poor, it built their villages, took care of their agriculture, helped in strengthen their health and in the way of getting their sciences, and supplied every village in the Syrian geography with all the services, this has not been a subject of controversy in the life of the President Hafez Al-Assad and what preceded the war on Syria through the responsibilities of the President Bashar Al-Assad, because Syria can be described as the abbreviation of “Syria of Al-Assad” as an indication to this special mixture of the social aspect of the country, freedom and democracy, the secularism of the country and its modernism. Its constitution based so much on the Islamic law as a main source for legislation, but it is a country that prevents the clerks from dealing with politics,  it restricts the limits of religion between the places of worship and homes, it chases the extremists and prevents any sense of sectarianism, in return, it opens up to a common livelihood lived by the Syrians through sharing the joy of living, they made what was described by the Pope John II as a dialogue of life that is rare, although it is an example that did not satisfy many seculars and clerks, as the equation between the belonging to Syria and the Arabism for an identity that it difficult to imagine a substitute of it, but through dividing between the religious and the tribal fanaticism.

The concept of the national security of “Syria of Al-Assad” based on the equation of the hostility to Israel as a compass, so according to this compass, it supported the Iranian revolution, it  opposed the Iraqi war on Iran,  it made the widest possible range of the Arab solidarity to secure it, so every resistance based on it wins, it grants the country a diplomatic concept that links it with the widest alliances on the basis of applying the international law and the UN resolutions, it is certain that Israel is incapable country to go on in peace in way that concords in form and essence with the texts of the international law and its essence, furthermore, it formed its strategy on the basis of the bilateral of the openness to all the international initiatives for a political solution according to the international law and forming the force under the slogan of the strategic balance which paralyzes the aggression and creates the ability to liberate. All of that is a special diligence in respect of “Syria of Al-Assad”, but this neither satisfies the advocates of peace nor those who suggested that the announced war is the solution.

In the experience witnessed by Syria during the years of war on it, there was a golden opportunity for judging scientifically on this example in building a state in the third world under the open US hegemony on the oil stored in our lands and the defense of Israel’s. Although it is early to have a final judgement on the equations which were embodied in the example of the state of “Syria of Al-Assad”, but the indicators show that the freedom and the democracy as well as the complicated relation with religion and the interrelated relation with the concept of the national security between sticking to the international law and the resistance and reluctance are the genius mixture which made the status of Syria, its strength and its stability and which it is difficult to imagine its formation on other one , so tampering in it in order to have more of its features will be a source of dangerous imbalance.

In the remembrance of his departure, God’s mercy be upon the soul of the President Hafez Al-Assad and protect the President Bashar Al-Assad the national, the loyal, and the well born man. God bless “Syria of Al-Assad” and make it more beautiful, powerful, securer, and more sublime 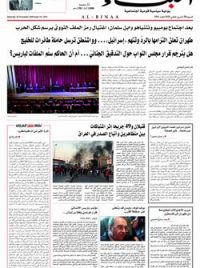