In an exaggerated way the Lebanese people have linked the future of the political life in their country with the external variables at a time in which an alliance that extends from Riyadh to Washington witnesses a state of a standstill, that is impossible to develop the settlement’s choices before resolving the future of the US presidency, which will accompany the arrival of Hillary Clinton to the White House, after it was clear that her superiority to her Republican rival Donald Trump is semi- settled,  and as her insistence on reconsidering the US policy in Syria and the region and consequently how to manage the relationship with Moscow and Tehran seems in a different way. The essence of the change which Clinton aspires to and which rules the steps of the administration of the US President Barack Obama including what remained of his mandate is to wait to go into  Syrian settlement that is ruled by different balances of forces in favor of the Syrian country and its Russian and Iranian allies, and the bet on more time through ensuring the conditions of the steadfastness of Al Nusra according to the play of changing the name and the claiming of a speech that has no expansion outside the Syrian borders, which Al Nusra will take the responsibility of depleting Russia and its allies, in addition to ensure a security bordered-strip for Israel and where Saudi Arabia is granted opportunities of intervening in the political future of the Syrian country.

The battles of the North of Syria and the magnitude of the political US confusion towards how to deal with them according to the understandings of Moscow, in addition to the probabilities of the involvement by supplying Al Nusra front with qualitative weapons that target the Russian aircraft and the recipes of the Afghanistan which the Saudis are talking about clarify that the deadlines which Russia has granted to the administration of Obama to make the settlements have become threatened unless the facts in the war fields change, and thus quickly change the considerations, especially that the ruling balances of the decisions that change the equations are not under the control of Clinton or who is agreeing with her from the American interior and the regional exterior. Everyone is aware that the US going to the war alone directly may change the balances, but everyone admitted that this has become from the past while the bet is on Al Nusra to impose more chaos, because the ability of overthrowing it militarily becomes among the responsibility of Russia and the allies in order to drive everyone to the negotiating table on which they suggest that they can improve their conditions on it.

The change which Clinton wanted for Washington, Riyadh and Tel Aviv is enhanced and gets rooted day by day, especially after the exit of Ankara from her equation. Maybe its accusation of the involvement in the failed coup in Ankara was in order to have control over the crucial position which is represented by Turkey and thus to temper in Syria after the Turkish positioning on the understanding line with Moscow before the coup and after it, not to go to the war but a bet on changing the rules of the negotiation. The political goal which The Washington Institute for Near East Policy and Washington Times newspaper are talking about is enhancing the weakness of the opportunities of unifying Syria after the war. This was proposed by the current US Defense Minister Ashton Carter who is nominated to stay in office as a source of mysteriousness towards the future of the unity of Syria. Saudi Arabia which the UN Envoy De Mistura has become one of its team’s workers provided a recipe of generalizing the Lebanese example of the sectarian system on this weakness. This example based on militias that disappear and appear and on the weak army. This system in Syria ensures a security belt for Israel that is offered by militias of Al Nusra assets that have a new name, it guarantees for Saudi Arabia by the force of the sectarian distribution which was suggested for the authorities in Syria the looking to the position of the prime minister with powers that are similar to the situation in Lebanon. This condition which made the coexistence with the figure of the Syrian President and his stay over the ability of Clinton, Saudi Arabia, and Israel to debate. But the bet is on making his powers similar to the powers of the Lebanese president whose the vacancy is filling his position today.

In Iraq the fate of the political regime and its stability depends on the magnitude of the Kurdish privacy and its aspiration towards the independence and the separation. And the devotion of the system of sectarian quota in the central, southern and western provinces of Iraq on a sectarian basis, that grants Saudi Arabia once again similar opportunities for the intervention by the force of the sectarian game, where it granted it in Lebanon this influence.  It seems that the fate of the Lebanese and the Iraqi situations is based on the consequences of what will happen in Syria. The success of the formula of the sectarian system as a recipe to sabotage Syria and weakening it will lead in Lebanon for a weak presidency and in Iraq for a Kurdish country which will be joined implicitly with the militia Kurdish region in the north and the east of Syria, while the success of the central state in Syria by crashing Al Nusra will mean the end of the dreams of the states of the sects in Lebanon, and the option of the Kurdish secession in Iraq. This is the geopolitical dimension of the war of the northern of Syria today.

The discussion of the Lebanese people of the hypothesis of the exit of the sectarian formula is a kind of accepting a possibility that is advancing whenever the units of the Syria army and its allies advance in the war on Al Nusra. Thus the Lebanese presidency will have the opportunities for the strong return for managing the state of institutions, and Iraq will have an opportunity of tuning the federalism into a formula for expanding the opportunities of the development, not to increase the chances of division. Just for that before resolving the fate of Al Nusra in Syria Saudi Arabia will not go on, and will not allow any of those who follow its instructions to proceed towards the settlements. The settlements have one title either the success of the project of spreading the sectarianism to the formula of the new constitutional regime in Syria as a sign of the regaining of Saudi Arabia and Israel their lost leading status in the region equations or Syria will win on the Saudi Israeli formula of the sectarian regime. The war of Al Nusra in the northern of Syria constitutes the betting horse, in this case the infection will be reverse and inevitable to the concept of the non-sectarian state in the Levant which is no longer possible the coexistence between these two opposites without defeating each other. The example which will in Syria will prevail in the region especially in Lebanon and Iraq. Till that time the waiting is the dominant aspect, it is a political cleverness to mobilize the waiting time in preparedness for the coming possibilities, at their forefront on the rhythm of the war of the northern of Syria the vibration of the formulas of the sectarian and ethnical organization in Lebanon and Iraq. 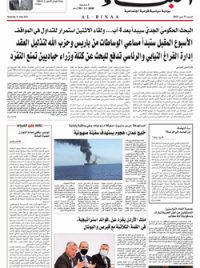