Nothing has changed in the sources of the US power since the arrival of the US fleets to the Mediterranean Sea, and when the generals have decided that the president whatever his name is, has to withdraw them and to resort to negotiation on a settlement with Moscow, because the great confrontation which will be broken out is beyond Washington’s capacities and considerations,.

All of what has changed was not in favor of Washington, since Moscow is here and Iran has become stronger politically, economically, and militarily. Syria is achieving victories every day, and Turkey which was the base of war has become the lost son, so what is left for Washington to possess is the infiltration to implement militarily ineffective strikes accompanied with clamor made by the panicked allies regarding the era that will follow the victory of Syria and its allies,  and a public relations campaign to avoid its turning into escalation that is not desired by Washington, so the discourse to the allies becomes; we are here once again, and to Moscow we will not repeat it again.

Washington comes to say to its allies in the Gulf and in Israel; do not be afraid of what is going to be in Syria, I will not leave you to Iran and Hezbollah, and I will not let neither Syria nor its President to avenge you, so be gathered, assembled, and be armed, and you will find us with you if you are in danger.

The press conference of the Secretary of Defense and his Chief of Staff and what they said about the future of Raqqa after its liberation, and the certainness of its handing over to the Syrian country under the slogan that the situation is very complicated, and that the issues of the employees’ salaries, the availability of electricity and energy are under the responsibility of the government, furthermore as we cooperated with its teams in the Euphrates Dam, we will behave in the civilian issues. All of that is enough to define the real balances not the scream of Donald Trump who comes to take what is left of money in the pockets of the Gulf rulers and what they have for the security of Israel in order to go to Tel Aviv distributing more of reassured messages.

The words of the Chief of Staff of the US armies denying the intention to engage with the Syrian army and its allies, or the seeking to prevent it from reaching to the Iraqi borders, and restricting the issue with the protection of the US bases and not to come closer to them, draw the rules of engagement not meaningless sanctions against the figures of the resistance or nonsense or glasses filled with hatred that will be exchanged by the defeated in Riyadh where any free Lebanese person will feel ashamed to be among them. 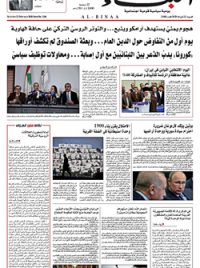