In the worst moments experienced by the administration of the Turkish President Recep Erdogan with Washington, and in the light of the developments of the events in the northern of Syria and the sticking of the US officials with the priority of their relation with the Kurds and the inability of Erdogan to understand that, for the second time the dilemma of the sense of greatness has been revealed as a barrier without realistic thinking in the Turkish ruling mentality. The issue according to the Americans neither related to the magnitude of the military capacity of the parties nor to the attitude toward the Turkish country and the keenness to ally with it.

Simply, Washington needs for a non-governmental Syrian party that grants it the legitimacy of deploying troops and experts and forming airports in Syria under the title of privacy that has magnitude of the realistic legitimacy and the ethnic or the national legitimacy, it needs for a party that responds to the US demands that is not loyal to any other country than America. In these two issues Turkey is like America it behaves like it toward the armed groups which affiliated to it, it wants from Washington to deal with it in order to get its legitimacy for the Turkish occupation that resembles the US occupation, even if the Turkish occupation was covered by a title of confronting the danger that threatens the security of Turkey, once under the pretext of the Kurds or the support of the armed factions that are loyal to Turkey. The pretext of the Americans remains the stronger in the war on ISIS and their coverage is more important through the relation with the Kurds.

The Turkish crisis occurs with Netherlands and Germany for the same reasons, the Turkish President and his government are waging a confrontation under what they consider a democratic right by communicating with the voters before the referendum, forgetting that he is talking about immigrants in another country, so what is presented by him is not to sign an agreement that allows the hosting country to organize electoral festivals and to receive the speakers from the two teams to identify the attitudes and to practice the choice, in favor of the resident communities, but it is an exclusive right of the representatives of the rule to mobilize their immigrants to vote for its favor. It is surprised to find the coming governments which want to hold elections and in respect of the privacy of the Turkish position toward the organizations of ISIS and Al Nusra and the issue of the refugees pave the way for Turkish governmental festivals that do not evoke campaigns of the extremist right, because Turkey does not see any law or logic but the one which helps it to be surprised for not dealing with its priorities, as the priorities of the others.

Politically, it is not possible to describe the Turkish anger along with the expressions and threats but only with the political madness for a frustrated country that lives the defeat and the isolation, and instead of absorbing what is surrounding its policies as complexities or making a review that allows drawing policies that commensurate with the variables it turns into a source of crises, that spreads anger and tension. This is the beginning of the tragic end of the countries which think that their size is protecting them. Previously, Turkey has experienced that with Russia, but the result was disastrous, and it has been forced to apologize, but the problem of the rule of Erdogan is that he wants to win in the referendum by provoking the Turkish feelings of the voters who live as their president the illusion of the sultanate and the arrogance of greatness, and whose their egos please the anger of the president and provoke them to vote for him according to the powers of the Sultan, but after the referendum he will leave the arrogance after he will send secretly to the Dutch government that “ I think that the crisis and the tension benefit both of us in the elections so we have to win together, in order to reconcile after the elections”.

Erdogan is a kind of the politicians who is aware how to deal with the game of the folk in the relation of the leader and the street’s people, its key is tickling the tribalism of the privacy and the greatness, then it is possible to fluctuate between the matter and its opposite without consideration or questioning. And thus the leader will be in an image that simulates the divinity over the change and its laws. 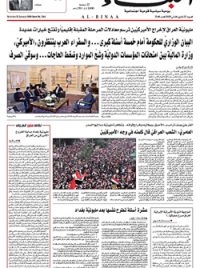