Those who are in charge of the United Nations had no longer any reaction for the actions of the UN Organization towards everything related to Israel after they found ready answer that it is the politics and the superpowers. Everyone remembers how the United Nations abolished a resolution for forming a commission of inquiry into the massacres of Jenin camp in 2002, simply because Israel announced its refusal of that commission. Therefore it is enough to see the UN’s actions in other issues that are not related to Israel. Even if the UN resolutions that condemn it remained mere useless actions.

If we read the two wars that are taking place in one time and in one region, in Syria and Yemen in the eyes of the walleyed United Nations, the scene will be like that: an opposition and a legitimate rule that are fighting, external forces that support both sides, massacres against the civilians, open humanitarian  tragedy, and external supportive forces of legitimacy that are accused of using the excessive force, which are in Yemen (Saudi Arabia), while in Syria (Russia and Iran). This is according to the UN reports issued by the same bodies, especially the International Council for Human Rights and the international organizations that work under the humanitarian name. While the difference according to the UN is that in Yemen the ceiling of the demands of the armed opposition is the partnership in a unified government that takes over the responsibility of implementing a political solution, that includes restricting the weapons with the state, putting a new constitution, and on its basis it holds the presidential and the parliamentary elections. While in Syria the solution posed by the legitimacy is based on a draft that is similar to the demands of the opposition in Yemen. The United Nations at the spokesman of its two deputies said publicly that the Yemeni opposition is exaggerated in its demand, because it must deliver the weapons first. But at the same time it is an unrealistic demand by the legitimacy in Syria, because it does not lead to a political solution, on the contrary it calls for the transition of power which means the stepping down of the Syrian President or at least his pledge not to run for the elections. Any UN official does not feel ashamed in front of this moral degeneration which causes the continuation of war in Syria and Yemen; the injustice towards the opposition in Yemen and the bias towards the opposition in Syria. We did not mention the clear realistic and the objective differences between the opposition of Yemen which fights the terrorism and the false opposition that has a role as the cover of terrorism, or between the two legitimacies; which one is false in Yemen that fell in one day, where the Saudi integration came to give it a mask, and the other in Syria that has loyalty at least of more than half of the Syrian people, so democratically, it is the necessary quorum of any rule.

Every time when the war rages in Yemen, and when the alliance which is so-called the legitimacy alliance got affected the UN alerted, as happened after the fall of the missile on Riyadh, while in Syria, the UN gets alerted when what so-called the armed opposition is in trouble, although these formations are known  for their interaction with the terrorism as recognized by the UN, and where the International Security Council remains in semi-permanent session for their sake; one draft in circulation and another under preparation. There was no UN official or deputy or even respectful journalist who came to inquire about this disgusting doubleness and about a deviation in the task of preserving the international security and peace, this is not explained but only by the political positioning along with the tools of the hegemony, in other words, when the opposition is a tool to affect the state of independence it becomes good and the state of independence becomes criminal, whereas when the opposition becomes a tool to get its independence it is criminalized and the sanctions are issued against its leaders.

Unfortunately the UN is not an organization for the nations, it was and still a tool to deprive the rights and the wills of the nations, it does not feel ashamed of its moral degeneration or its disrespect among the nations. 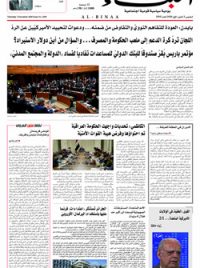