The Americans and their allies endeavored to trade with the understanding accomplished by Hezbollah with ISIS after a clear victory on the militants of ISIS in the barrens of Lebanon and Syria. This understanding depended on transferring the remaining militants and their families along with their  individual weapons to Deir Al Zour in exchange of revealing the fate of the Lebanese kidnapped soldiers and liberating the martyrs’ bodies and a detainee who belongs Hezbollah. The Americans and their groups in Iraq and Lebanon accompanied with the satellite channels and newspapers funded and operated by Saudi Arabia hastened to distort the image of Hezbollah and the clarity of its victory and accusing it with the seriousness in fighting ISIS which the victories and the blood of the martyrs prove. The Americans have waged a war of disrupting the understanding by hindering the bus of the militants of ISIS in the desert, but Hezbollah did not get embarrassed, on the contrary it defended its understanding, showing the ethics of wars and the concept and the strategy of the positive psychological warfare in order to dismantle ISIS and to prepare for the surrender of ISIS’s militants in its next battles, it has perfected the use of the campaign which was waged against it to show how Hezbollah deals,  its fighting value, its military features and in preparation for the surrender of ISIS’s soldiers whenever they are besieged by its fighters, being confident that they will not be treated brutally as they treat their victims.

In the last stages of the understanding, the arrival of the convoy to its destination, and the release of the resistant detainee Ahmed Maatouq all the balances of forces which surround the war in Syria have been brought. The Americans as Hezbollah have made every effort, but this time the word of America was versus the word of Hezbollah and the war was in its peak at the borders of the Euphrates towards Deir Al Zour, till Jacob Amirdor said that Israel fought in 2006 to push Hezbollah to beyond Litani, it is two kilometers away from the borders from the side of khardali. Now Hezbollah is on the borders of the Euphrates expanding hundreds of kilometers, so within days the war of Deir Al Zour has been resolved, and the Americans announced that they stopped following-up the convoy which belongs to ISIS depending on a Russian request, that convoy continued its way and reached its destination, thus Hezbollah was able to liberate its resistant detainee. Therefore, it was proven that the word of Hezbollah was the influential, moreover America which tried to trade to undermine the understanding and did everything possible to disable its Implications has turned into a partner in implementing it in favor of Hezbollah, as it is a partner that offers the participation to liberate the detainees of Hezbollah on the day of exchange after the war of July to ensure the arrival of the martyr Samir Al-Kuntar liberated to Lebanon. These are the real balances of forces in the region for those who know the meaning of reading politics and strategies.

The leader of Hezbollah Al Hajj Abu Mustafa has made a rare TV interview from Deir Al Zour after raising the siege, he emerged as a political and high intellectual leader, he chose his expressions very accurately. He talked within minutes what is enough to draw the course of the war in Syria and the path of Hezbollah in it. He said that emerging to media is a translation of the equation “we will be where we should be” into “we will be as we should be” When it is needed to emerge publically we emerge and vice versa. He said that the military steps are decided by the Syrian leadership and we carry out what the leadership demands. He added that the decision of the Secretary-general of Hezbollah of emerging to public is in order to show this axis of resistance in its strategic victory and in all its aspects from Russia, Iran, Iraq Syria, and Lebanon, where Palestine is the cause, giving every part of this axis a meaningful feature, Abu Mustafa read a written text and repeated sentences which he said twice, he was a distinctive leader in his performance, but many times he spoke fluently without a text, so the smoothness of the expression was an honesty and a credibility to a leader as his indication to the symbolism of the five pillars of the axis of resistance “friendly Russia, Iran is the Islam, Iraq is the Arabism, Syria of Al-Assad , and the resistant Lebanon”, with these pillars the resistance is wining by its morals, culture, courage, and faith.

Few days ago immediately after the liberation of Deir Al Zour the Syrian President Bashar Al-Assad issued a republican decree in which he determined the date of the sub-elections in Deir Al Zour on the thirtieth of September for a vacancy of a parliamentary seat, while the Lebanese officials are escaping from holding anticipating sub-elections for months and years. Between the security situations of Syria especially Deir Al Zour and the situations of Lebanon, we know the meaning of the existence of a country and the appropriate conditions for holding elections, and how the men in powers are. So those who say that the elections in Syria are blocked, their problem is not in the appropriate security and administrable conditions but the blocking, and those who are afraid to hold them on their account, will lose more when the date is postponed, so hasten to do so today, it is better than tomorrow or is not as bad as tomorrow. 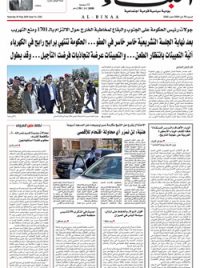