At the moment of negotiation and power, the game of the international and regional abyss seems at its peak. While the alliance led by Russia and includes mainly Iran and China and other allies as Syria seeks to continue its progress without a direct confrontation with America, America seems unable to bear and to accept the progress of the opposite alliance over Asia that puts Israel and Saudi Arabia in a difficult position. Although the US military presence recedes, but it seems that it is ready to send confined messages of power hoping to impose retreat without a clash.

The language in which Washington talks about sanctions on Iran and Russia especially regarding energy sector is like a declaration of war to Moscow and Tehran. The meeting of the Russian and the US energy ministers yesterday witnessed a negotiation that included mutual offers. Washington announced more sanctions on the Nord Russian Stream project which transfers gas to Northern Europe, despite the fact that Russia was ready for understandings on European gas market that grants a share to the US rock gas companies, as promised by the Russian President Vladimir Putin at Helsinki Summit, but the Americans who need this gain bet on including other issues that are related to the region especially Syria and Iran, but these issues do not get Russia’s acceptance to the extent that it would be ready to withdraw the special offer of rock gas if the American escalations of sanctions continued.

In Iraq, there is a high –level American-Iranian political security engagement and high-ceilinged mutual messages. Washington which knows its inability to bear a direct confrontation with the resistance forces tries to link this confrontation with the escalation against Iran and threatening it of paying the cost of targeting any US bases in Iraq, but the Commander of the Iranian Revolutionary Guard called in a special statement to Al Manar TV those who have military bases in the range of two thousands kilometers of Iran to be aware of the accuracy of the Iranian missiles. In Yemen, Saudi Arabia tries to thwart Geneva talks in preparation for the recent attack which it tries through it to change the military situation in Hodeidah region, where Washington was the cause of the Saudi attack as was revealed by the statements of the US Secretary of State and the Minister of Defense before the Congress considering that Saudi Arabia abides by the required standards in avoiding the civilians, despite the UN recognition of the massacres committed by Saudi Arabia. But the humanitarian title is the pretext which covers Washington’s positions for supporting any war or exerting pressure to stop it.

Meantime, Russian-Chinese unprecedented maneuvers take place, in which three hundred thousand officers and soldiers and all the weapons of land, sea, and air participate. These maneuvers are supervised by the Russian President Vladimir Putin. They are called “East 2018” to announce a Russian- Chinese readiness to confront any military challenge. This message is clear in its timing and content as the Iranian one, it says to Washington that any escalation will lead to a confrontation and we are ready.

These exchange messages take place at the backdrop of the decision of not to collide, this means that they are negotiating messages, and that Idlib  is the only available engagement arena for recoding points along with the US bets on achieving something in Hodeidah. In Idlib, the Russian- American-Iranian race was to get the Turkish ally which Russia and Iran won. The US army became Al Nusra front which they wait its protection from Turkey through the temptation of a canton led by Ankara in the northern of Syria that gives the real legitimacy for a canton led by Washington in the eastern of Euphrates. Therefore it is a division that gives the legitimacy to another division and an occupation that gives legitimacy to another occupation, but under the determination of resolving, the Turkish position had changed, it has abided by fighting Al Nusra, where everyone is curious, observing, and waiting. 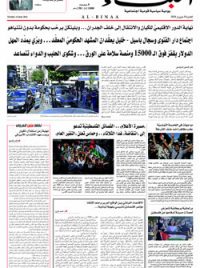