The Russian endeavor to leave the Kurdish issue in Syria to the US specialization since Washington’s regression with its fleets from the Mediterranean Sea in order to hit Syria has played a role in the US comfort for having a reliable ally which is not shared by anyone to wage by it the battle of Raqqa when it is the time, but it played an opposite role in forming the reason which drives Turkey to Russia when Ankara will reach to the same conclusions to which Washington has already reached by virtue of the impasse in front of the choice of war to overthrow Syria militarily or politically by the force of a decisive military victory.

It was enough for the battle of Aleppo to prove to Ankara what was shown by the experience of bringing the fleets of Washington to recognize the fertility of the continuation of the war and the attempt to search for a special Turkish ceiling to intervene in Syria, it is through the prevention of forming Kurdish security privacy on the borders with Turkey. The difference in time between the US positioning to prepare Kurdish force that follows practically the US armies and the Turkish attention was enough to the rootedness of the Kurdish situation and to make Ankara worried. The leadership of Turkey tries to tempt Washington by compensating it through direct Turkish intervention in the war on ISIS in exchange of having control over the Kurds. The Turks made efforts but they failed, so they turned twice to Moscow, including their last attempt to please Washington with an offer of barter after Aleppo and before Al Bab battle and after it, which ended with a failure that was translated by Manbej today, and the horizons of Kurdish cooperation with the Syrian army under common Russian US umbrella in the battle of Raqqa.

Moscow is aware that Washington will try to sweep the cooperation in the war on terrorism with costs in exchange, but it is aware that the Turks are the desired partner in the war on Al Nusra front, and that the Americans are an imperative party in the war on ISIS without a cost in exchange, so it is enough to put them in front of the inevitability of the Kurdish-Syrian cooperation in order to be on the right track, therefore, the Russians have ignored all the US-Turkish-Israeli-Saudi escalation against Iran and Hezbollah to suggest the willingness to have a cooperation deal in the war versus resizing the role of Iran and Hezbollah, till the Turkish President resorted to Moscow once again, because the most important player in the Syrian settlement and in the war on Al Nusra is Turkey.

The Turkish President knows that he cannot wait for the decision of the war on the Kurds by the Russian President Vladimir Putin or the Americans for the sake of Turkey which it betrayed its pledges to Russia repeatedly, and that he is going to Moscow to lose his bets, and to make the others lose their bets as well, like the Kurds. What is waiting for him in Moscow is a call to rationalize the influence in Syria in favor of the formation of a country without any security privacy. The sooner the Turks are in their cooperation to end the militia’s dominance which they support in Syria and in the partnership in the war on Al Nusra and in a support of a settlement which the Kurds are participating that is translated by a government under the leadership of the Syrian President and the Syrian army, the more attainable the opportunities become to end the chances of the birth of Kurdish canton which the Turks are afraid of. The more the Turks stick to the dominance areas in Syria, the more the Kurdish dominance gets rooted.

The Russians play their calculated steps in the war. While the justification of the survival of  the  troops of the American who accelerates to have a war on ISIS in Raqqa will end with the end of the war, whenever the settlement path accelerates where there will be no justification for any Kurdish canton that they hide behind, therefore the way to that is Turkish by facilitating the influence in the settlement project instead in the dominance areas which will legitimize the Kurdish privacy, in return the Israeli attempts to stick to the search for privacy in the southern of Syrian will not withstand according to what will happen in the north where the big war theatre, and where the Syrian army has drawn through its field movement strategic changes through its reaching to the Euphrates channel and has imposed its presence as an inevitable partner in any war on ISIS.

A long time ago Netanyahu went to Moscow, but he was a Russian ridiculous subject, but at present when Erdogan went to Moscow he became a sad dramatic subject. Netanyahu started his talking with the Russian President about the Persian Minister Haman in the time of the King Ahasuerus who has issued a demand of the extermination of the Jews, just in order to say to the President Putin that the Persians are here, this has happened since 2500 years ago, and today we are celebrating Purim for being saved from the extermination at their hands. So we do not accept them to threaten us once again, the answer was a cynical smile by the Russian President who was playing with his mobile phone in front of the TV cameras, this was broadcasted by the Russian channels. He answered those who lived in the fifth century BC cannot deal with the challenges of the twenty-first century; everything has changed, so you have to find solutions from that time. But well informed Russian resources say that Putin’s suggestions about the past time and the old history is double, he foretells Netanyahu that everything is changing in Syria specially through his clarifications to him and to Erdogan that the cooperation with Iran is so good and that Hezbollah is an important partner in the war on terrorism, moreover, its presence is accepted by the Syrian country. The resources say that Putin’s suggestion is not only for the fifth century BC and the current century but regarding what has changed in the northern of Syria and  the moving towards the demise of the dominance areas which some of them remove the others. The solution from the bygone time is a mockery of Netanyahu’s historic words, where the feast of Purim is the celebration of the success of Esther the niece of Moedecai the adviser of the King Ahasuerus with the support of his uncle to tempt the King to marry her in order to appeal him to abolish the decision of the extermination of her people.

The Russian media resources say that the President Putin has put the Turkish and the Israeli visitors in front of the fact of the Russian Iranian cooperation and the Russian confidence in the relation with Iran and Hezbollah, calling them to be convinced that the political solution in Syria and the return of the powerful Syrian country despite its difficulty and cruelty on the two guests is the least losses which may occur, because the alternative is a Syrian country that is prevented from being dominated on the  whole area of its national territory by the force of the foreign interventions. It has the right to grant some of its geography for others who disturb whom disturbs it. The more the time passes the changes get rooted, and their eradication becomes more difficult. As the moving toward a settlement is an adventure because the Syrian country may decide to enhance its relation with Iran and Hezbollah, as the opposite moving is a bigger adventure because the areas under the domination of the Kurds will get rooted, as there will be similar areas in which the Iranian will be present more freely, and areas where Hezbollah will be rooted more, while the formation of the country which is responsible of the security in the entire country is the least adventurous choice. 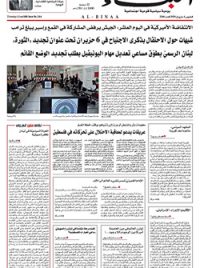