The occupation government sent an official request to the United Nations to redeploy the Disengagement Observer Force (UNDOF) on the disengagement line with Syria since the year 1974, after it offered the necessary facilities to Al Nusra Front and the other armed groups to occupy the sites of the UN observers and to take them as hostages, as an announcement of the end of their task and the opening of the borders line to provide the Israeli support to the armed groups, and thus to form a security border belt that is similar to the one set up by the agent Antoine Lahad in the southern of Lebanon before the liberation  in the year 2000. Knowing that Israel announced that publicly at the level of its prime minister or its minister of war, handing over the task to Al Nusra front as an official branch of Al-Qaeda Organization in Syria, and as an entrusted party to the security of the occupying entity. On the other hand, the end of the disengagement agreement was a direct announcement of the start of an open stage of the Israeli military intervention in the Syrian depth to dismantle Syria and to contribute in the US-Saudi project which aims at overthrowing the national state of Syria.

The explanations given to the analysts affiliated to the occupation government about the Israeli request are that the Syrian army is on borders, it has almost practically got rid of most of the armed groups, so it is useless to continue the denial based on refusing the recognition of the facts of the restoration of the equations of power by the Syrian state, whether against the armed groups or against Israel, especially after the dropping of the Israeli aircraft F16 by the Syrian air defense in a way that broke the image of the Israeli deterrence.

It was clear that the decisive reason for refusing the settlement by the Americans in Syria according to the Russian concept which is based on refusing the search in any equations demanded by Israel and related to the future of the Syrian state or the future of the presidency in it or the arrangements of the exit of Syria’s allies to reassure Israel was always associated with considerations that are related to the Israeli demands. And it was clear that since the liberation of Aleppo Israel was linking every military step in Syria with what the Americans and all the allies especially Saudi Arabia can do, as a change in the ruling balances of the military equation in Syria and disrupting the capacity of the Syrian country to restore its geography which is under the control of the armed groups. This means that the Israeli request has not been achieved, but only after the clarification of two facts; the Israeli certainty of the impossibility to get gains related to its requests in Syria, and the impossibility of making changes by America that affect the strong unified Syria.

The Israeli request means the practical recognition of the fall of the Israeli dual project; the bet on the success of the security belt project on one hand, and the bet on the effectiveness of the American and Israeli military interventions to impose concessions on Syria. As the Israeli decision to end the role of the UNDOF and the disengagement agreement signed in 1974 were an announcement of the start of the Israeli-American interventions stage to divide Syria or to impose its sharing or to disrupt the formation of the state’s project in it through structural changes that end its being as an independent resistant country, as the Israeli request of redeploying the UNDOF and the work according to the disengagement agreement means the end of this stage and the recognition of the failure of the Israeli-American project of division and sharing and getting concessions that commensurate with the American-Israeli aspirations.

The premise of US strike on Syria was under an Israeli request which would not have been suggested if the occupation government had any hope in changing the situation of Syria’s victory or the restoration of its geography. Israel is the better party in behaving in accordance with the actual American position away from the propaganda and the naïve maneuvers. 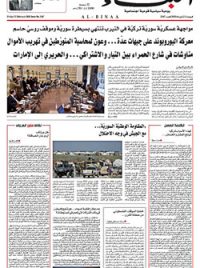