In the moments of the strategic ambiguity, and when the effective forces and the major players keen to maintain this ambiguity in responding to the requirements of politics the followers and the analysts wait for a tactic articulated event that allows them to read the strategic plans and to reveal a lot of the ambiguity that surrounds them.. This is exactly what can be applied regarding the issue of the deployment of the Syrian army in Manbej, by focusing on the backgrounds of the US strategy in Syria between proceeding in the strategy of the former President Barack Obama by concentrating on being away from any serious coordination with Russia, and the bet on the cooperation with the two stubborn allies Turkey and the Kurds, or to proceed in this cooperation silently, including the willingness to be opened to a broader role of the Syrian army in the next cooperation especially toward Raqqa.

The Syrian progress in the northeast of Syria imposed a new equation, as the Turkish entry to Al Bab city imposed an imminent event. The two events are associated with the Kurds who are under a Turkish threat, but the Syrian army opens for them a punch of hope, so the Kurds decided to call the Syrian army to enter to the threatened areas. The question was at that time; could the Kurds do that without the Americans, and if they did that can they fulfill the demand and open the way without the Americans who are deployed there? Russia announced an agreement with the Turks about that deployment, but the Turks denied that, then they announced their acceptance, so the matter became above the discussion and the question. Without the Americans it is impossible to achieve the Kurdish-Turkish acceptance of the arrival of the Syrian army to Manbej at the same time.

Did the Americans have another choice? A question is asked in front of the difficulty of the Turkish-Kurdish relationship, the obstinacy of the two teams, their concern about their future, and the important shift of the Syrian army with a rare strategic cleverness. The answer is that the Syrian step has achieved its goals, because it formed a test by fire to the US intentions. What was achieved by the Syrians was possible by the Americans if they wanted to dismiss the battle of Raqqa, and be sufficient with just the disengagement between the two allies, by putting one of the their units in Manbej surrounded by the Arab units which they trained, and considering it an area for the US leadership, so this can save the Kurds and the Turks’ face, but it means going on in the strategy of sharing Syria as dominance areas, one for ISIS, and one for Al Nusra, as well as ignoring the war on ISIS during the absence of the ability to combine the Turks and the Kurds in one unified front and the inability of each one of them individually to provide the battlefield requirements. But what was wanted by the Syrian army has revealed the extent of the presence of that choice within their plans.

The Americans know that the progress of the Syrian army in the northeast of Syria and the recapturing of Palmyra is a part of a plan that approaches from Raqqa, and its mobilizing in Deir Al Zour is a part of a battle plan, and that Russia and Iran are parts of this plan. ISIS and Al Nusra will not be allowed to remain in the Syrian territories whether the Americans cooperate or no, because this will make the Turkish presence and the US one an occupation, there is no justification for its presence outside the battle which justifies its presence and which is the fighting of ISIS. The US decision was by favoring a compromise for the deployment of the Syrian army in Manbej as the first transition in the war course, where the Syrian army is separating between two allies of the Americans with the consent of the three parts the Kurds, the Turks, and the Americans.

With the approval of their allies the Americans have cooperated with the Syrian army in the war on ISIS, and the Russians have facilitated for them the task on the Kurdish-Turkish- Syrian banks. 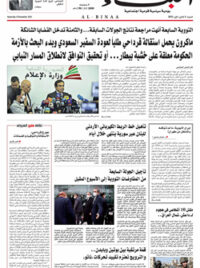