Some bullies open a debate entitled the Russian-Israeli relationships trying to promote the priority of these relations over anything else in the Russian politics, they stem from the repercussions of the fall of the Russian plane off the coast of Syria, without informing us about the source of their knowledge that Israel caused the fall of that plane. They open a record of the Israeli raids in a way that is full of hostility to logic and truth. They say that Israel is roaming in the Syrian airspace before the Russian observation and satisfaction, ignoring that a year and a half ago Israel did not dare to enter the Syrian airspace, it was carrying out its raids from the sea or from the Lebanese airspace, because the Syrian Air Defense which was supervised by Russia has drawn a red line by a decision of the Syrian President since their dropping the first Israeli plane in the Syrian airspace.

Those who talk about the relationship with Israel that reaches holiness by the Russian leadership are asked to tell us about the source of their information regarding the Israeli role in dropping the Russian plane other than the Russian statements. The question is was Moscow obliged to announce that?, while everything can be dealt under the title of “friendly fire during a clash” which means that a Syrian missile has hit the Russian plane by accident, so why did Russia intend deliberately to refer to the Israeli role allowing for some bullies to make use of this Russian intention reversely, and to underestimate the minds of people by their claims and assumptions which are contrary to the main question which is why did Russia intend to refer to the responsibility of Israel without any clue,  since the dropping of the plane was not a result of Russian-Israeli collision?

No president in Russia needs to know that when the decision of the positioning in Syria under the title of restoring the Syrian country of its sovereignty was taken, it means an open collision with the sponsors of the project of destroying this sovereignty “Israel, Saudi Arabia, and America”. There is no need for a brilliant mind as the mind of the President Vladimir Putin, his security experience, and his understanding of strategies to know that, since the simplest challenge is to think about how to manage that conflict, which the winning in it forms the defeat of the American-Israeli-Saudi tripartite, that is wanted by Russia without shedding blood or the direct confrontation. The observation of the course of the three years of the Russian positioning proves that Moscow sticks to the concept of the Syrian sovereignty over the geography without any bargaining, and that the development of the sovereign content of the political discourse in favor of the Syrian country is clear in the Russian discourse dedicated to Washington, Ankara, and Tel Aviv, and that the development of the capabilities of the Syrian army in conformity with the sovereign presence of the country depends on a Syrian decision along with clear Russian support.

It is easy to conclude that Russia is aware that the end of the war with the armed and terrorist groups which means the end of the armed presence will raise the problem of the sovereignty over the Syrian airspace as an engagement line with Israel. So Moscow has to resolve this sovereignty in favor of the Syrian country. The conflict on the presence of some Syrian territory under the occupation of Israel will keep the tension. The position of Syria in the axis of the resistance and the Syrian-Iranian relationship as well as the relationship between Syria and Hezbollah will make the Israeli role more hostile, while leaving it controlling the formation of the military scene will mean raising the level of tension and reaction to the extent of exposing all the achieved goals in Syria to erosion and taking the risk of dismantling the internal military achievements and remobilizing the armed groups in new timing.

Because the Russian statements have notified us of the Israeli role in dropping the Russian plane, we have to ask about the reason of these statements which have one justification; the announcement of the fall of the previous cooperation to prevent any clash, and the preparation to resolve the flight over Syria in favor of the Syrian-Russian cooperation, to the extent of considering the Israeli movement off the Syrian airspace an aggressive action that must be repelled. It must be noticed that the issue of the S-300 missiles and their delivery to Syria has aroused many questions by the bullies, while the showing of their presence or not is an issue concerns the Syrian army alone, because in any forthcoming confrontation those bullies will emerge as they emerged before to ask where is the S-400. Maybe some silly people will consider the dropping of Israel plane is mere an agreed play for face-saving, as if the winning of Syria in the war was not the main defeat of Israel under Russian unequivocal support? 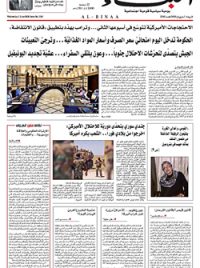