Since the Israeli failure in the south of Lebanon in 2000, Washington had to be aware that in order to continue its imperial project in Asia after the control on Europe in the war of Yugoslavia, the expansion of the European Union, the colored revolutions, the fall of the Soviet Union, and the fall of Berlin Wall, it has to be present directly and to confront Iran as an indispensable condition for such project. Just for that, the wars of Iraq and Afghanistan, the war of Lebanon 2000, the wars of Gaza 2008-2014, the war on Syria 2011-2019, and the war on Yemen 2015 – 2019 were indirect forms of such confrontation. The nuclear understanding and the withdrawal from it was a translation of this confrontation during the policies of containment and siege. On the other hand, Iran had to be aware that the avoidance of that confrontation is no longer possible, on the contrary, it has to wage it with strategic intelligence taking into consideration the necessary time and the capacities in order to take the lead in this confrontation; this is the meaning of the strategic balance.

The Iranian nuclear program was as much as a scientific, economic, and strategic option of the Iranian independence it was one of Iran’s tools to achieve the strategic balance through possessing the full nuclear capability which enables it in case of provocation to produce nuclear weapons. Before the year 2000, the nuclear program was neither active nor present. But what is called by Washington as the Iranian influence, in other words, the support of Iran of the resistance movements in the region was as much as an expression of Iran’s adoption of the resistance option, it was an expression of its desire to achieve this strategic balance. Before the year 2000, the supportive position of Iran of the resistance movements was not as it is now.

Iran dealt with all the American wars in the language of containment, then through the indirect confrontation especially in the wars of Iraq and Afghanistan. It succeeded in turning the siege on it into an opportunity to exhaust the American imperial project and to frustrate it. It made use of time to develop its nuclear program and to turn it into a platform of engagement and negotiation as it made use of the development of the resistance forces to be present in the full war in the region. When America took the decision of the major battle and chose Syria as its arena, Iran was confident of its readiness for this direct confrontation, it was present directly contrary to what it did in Iraq and Afghanistan, it refused the proposals of sharing which it had accepted before. It is known for both Washington and Tehran that the nuclear program and the resistance forces are two different expressions of engagement and not its main reasons, therefore, the American withdrawal of one of them makes the confrontation closer not farer as the American discourse says.

The region and the world are moving from the strategic balance to the ability of taking the initiative strategically with a Russian reposition which observed the variables and grasped the historic moment carefully, and with a Chinese progress in the world economy. Therefore, those who do not want to see the strategic decline of the American imperial project have a problem. 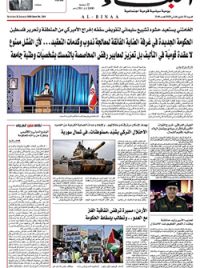