Dozens of reports and studies issued in Washington and Tel Aviv meet on one result regarding the decision of the American withdrawal; the Syrian President is close to his victory and the reaping of the fruits of his steadfastness. While Israel lives its worst situations since its birth as an entity seventy years ago. Veteran Middle East correspondent Elijah Magnier in Moon of Alabama site the most expanding site summarized the forthcoming scene by saying that “the United States is leaving, and the Arab Gulf states are coming back to Damascus to balance against Turkey. The Kurds will stay with Syria, and Idlib will be liberated”. He concluded “Syria has advanced precise missiles that can hit any building in Israel. Assad also has an air defense system he would have never dreamt of before 2011 thanks to Israel’s continuous violation of its airspace and its defiance of Russian authority. Hezbollah has constructed bases for its long and medium range precise missiles in the mountains, and has created a bond with Syria that it could never have established if not for the war. Iran has established a strategic brotherhood with Syria thanks to its role in defeating the regime change plan and an exceptional bond between Syria and Iraq has been built”. He concluded “The anti-Israel axis has never been stronger than it is today. That is the result of 2011-2018 war imposed on Syria.”

The Economist and the American Interest magazines met on reading the results of the American withdrawal. The US journalist Leon Hadar started his article published in the “National Interest magazine” saying “It is possible to understand the almost hysterical reactions among members of the Israeli political establishment and its media outlets to President Donald Trump’s decision to evacuate 2,000 American soldiers from Syria. Israel would now be left alone without American protection. The Economist magazine said that it did not take long for America’s decision to withdraw from Syria to be felt across the Middle East. The Syrian regime, along with its Russian and Iranian allies, rejoiced. Arab states hurried to make up with Syria’s leader, Bashar al-Assad. The Arab League will soon debate his return to the fold. America’s Kurdish allies, crying betrayal, urged him to help fend off a looming Turkish invasion. Israel scrambled to contain the damage.”

How did Israel react to contain the damage is the fundamental question. The answer is through the dual round of the US Secretary of State Mike Pompeo and the US National Security Advisor John Bolton to the region countries. This dual movement has one title “It is important that Al-Assad does not emerge victorious and Israel defeated”. Therefore, the race towards Damascus among the Arabs, Kurds, and Turkey should not continue. It is required to coordinate the withdrawal in a way that ensures the smoothness of the successive steps to maintain a kind of Turkish-Kurdish-Arab integration that ensures that Syria will not emerge victorious, thus it averts Israel the bitter defeat.

Pompeo and Bolton suggested that “the Arabs should not return Syria immediately to the Arab League, but to set conditions, that the return must seem as Syria’s compliance to Arab conditions”. The quick surprising response was from Egypt which hosted the Head of the National Security in Syria the Major General Ali Al Mamlouk few days ago. The speech of the Egyptian Foreign Minister about conditions that must be met by Syria for the acceleration of the course of the political solution is practically a meaningless invitation, because the future of the political process on the parallel axis is governed by Turkey, therefore Egypt and Saudi Arabia’s feeling of danger of Turkey’s uniqueness in Syria must encourage them to open up to Syria. The only result is to raise doubts about the usefulness to respond to the efforts of openness. The public opinion in Syria refuses every return to the Arab League which was a partner in the conspiracy against Syria. It doubts the usefulness of tolerance and not setting conditions for the return as public apology and the compensation of the devastation resulted from the Arab position against Syria.

On the other hand, the Kurds have to stop giving offers to the Syrian government to avoid a Turkish military action that Washington ensures that it does not happen. While the Turks must stop attacking the areas under the Kurdish control in exchange for Washington’s ensuring of their managing the Syrian opposition issue in Geneva path and supporting the groups affiliated to Turkey in Idlib. Bolton succeeded with the Kurdish leaderships, but he lost in Turkey, since Turkey has ensured the issue of the opposition from Moscow. Its groups in Idlib are falling in the face of Al Nusra front; therefore the only compensation is a role on the border areas at the expense of the armed Kurdish groups. Bolton lost because he is dealing with a country in the NATO and it cares of it interests, while Pompeo succeeded because he deals with governments that do not dare to put their interests above the US and the Israeli interests.

Certainly, the outcome will not be as the Israeli’s wish. The Arab rulers may lose the opportunity to return to Syria through their League except under Syria’s conditions. The Syrian army will enter Idlib and the Eastern of the Euphrates, while the Arab rulers at the Arab League will cry the loss of their role as their ancestors cried the loss of the rule of Andalusia, they are crying as the children for their role which they do not defend it as men. 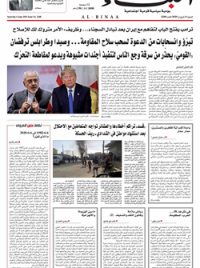