The US President received the Minister of Foreign Affairs of South Korea; they talked about the preparation for the summit that will bring him together with the leader of North Korea Kim Jong-un. On the same day, the US President revealed a secret visit done few days ago by the head of intelligence who became his Secretary of State Mike Pompeo to Pyongyang to start the negotiation with the North Korean leader. He does not hesitate to say that the talks were positive under the title of disarming the nuclear weapons in the world. It is known that the former North Korean leader the late Kim Il-Sung  the grandfather of Kim Jong-un took the initiative to disarm the nuclear weapons in the world through collecting these weapons at the permanent members of the Security Council, then to transfer them outside the Security Council to the countries  which they choose among them, in exchange for providing the necessary guarantees not to be  subject to any aggression and to grant them the economic incentives for the development projects instead of the arms race.

Now the grandson Kim Jong-un re-proposes this initiative, he says that he is ready to store the nuclear weapon of North Korea at each China and Russia in exchange for guarantees for its security, weapons, economy, and legitimizing its diplomatic status globally on one hand, and on the other hand, the abandonment of Washington of using South Korea as a military base to threaten the neighboring countries. This initiative paved the way for negotiation, in other words; at this stage the reach to thee negotiations which Trump wants to be at the top of his agenda at least for the next year was impossible without expecting clear Chinese-Russian contribution on many aspects to assure  North Korea that it will not be at weak negotiating position.

Although there were many analyses that talked about the reason of  the arrival of Pompeo to the State Department, he takes over the negotiation or maybe he has continued his managing the negotiation which he started before he left the CIA headquarter. This has been done through channels with Russia, China, and the North and South Koreas. It is the file that its achievement will be the way for having the opportunities for a second term in the White House, so all the files must be in the service of its success; this means that the US positions towards the future of Syria must not pave the way for a confrontation with Russia. This provides a full explanation of what was said that it was a strike under the Russian ceiling that did not disturb or make harm and it is easy to deal with, but at the same time, it grants Trump an internal balance among his followers who will not verify the results as much as they will see them through the US media whether in photos or in the news that US missiles were launched toward Syria.

The path which will be drawn the US negotiations with Korea will prevent further US escalation with Russia, especially in Syria; the most important file of the Russian President Vladimir Putin. This leads to Iran’s comfort and Israel’s concern. The practical exit of Washington from Syria in favor of Russia will mean that Israel will be alone in confronting Iran practically, while Iran will not be under the pressure of a direct clash with the Americans. This will drawn new different equations for America’s allies in dealing with Iran, at their forefront Saudi Arabia which is still leading escalating media discourse against Iran, but this new change may explain what is being talked about a compromise in Yemen and a progress in the indirect Saudi-Iranian negotiations led by the Sultanate of Oman. 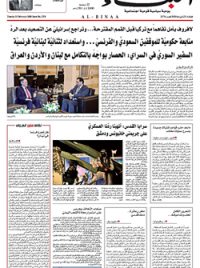