When the Vietnam’s revolutionaries and people defeated the American occupation of their country they were doing so out of their pure patriotism, they did not think that they are doing that on behalf of all the nations and their liberals, they did that to humiliate this arrogant aggressor who controlled the fate of people and their wealth. When the world celebrated the victory achieved by the Vietnamese, they did not express admiration of the miracles achieved by the simple, the poor, and the weak in confronting the killer which is protected by money, techniques, and the limitless capacity of killing, but the world was sighing because America which frightened the world with panic is getting out of the war differently, it will be less brutal not because it got lessons but because it is bleeding and unable to wage it once again.

On March 26, 2015 the rulers of Riyadh considered that the freedom of Yemen forms a source of danger against the Saudi era which overshadowed on the Islamic and the Arab worlds since the defeat of the Arab armies in 1967 by the Zionist occupation army which assigned the political outcome of its military victory to its allies as the House of Saud which was also hostile to Gamal Abdul Nasser who was the title of the confrontation with the occupation entity. Therefore, the rulers of Riyadh decided to wage a swift crucial war against the forces of the resistance in Yemen to save the Saudi era from collapse in the light of the understanding on the Iranian nuclear file without taking into consideration the Saudi and the Israeli demands by the West countries on one hand, and in the light of the variables which led to the failure in the war led by Washington on Syria and funded by Saudi Arabia and run by its armed groups o9n the other hand.

On March 26, 2015 Yemen was liberated through a popular and military uprising in which the revolutionary and the popular committees participated along with the army, clans, and elites. This led to the liberation of the cities, towns, areas, barracks and institutions. The man of Saudi Arabia Mansour Hadi did not find anyone who carries his photo or shoots a bullet for his sake from Sanaa to Aden. The meeting on the Yemeni-Yemeni political solution was like the consensus on sticking to the independence. But on March 26th of 2015 the House of Saud announced to end the Yemeni independence and to impose the regime of trusteeship and occupation on it, thinking that this issue will take few days by the Crown Prince who wanted to express his leadership of the Arab and Islamic worlds through a swift war and a decisive victory and to impose his authority in preparation for the deal of the Century which was prepared with the Israeli Prime Minister Benjamin Netanyahu under the title “Jerusalem is a united eternal capital of Israeli”.

On March 26, 2015, Riad Yassin the Yemeni Foreign Minister at the era of Mansour Hadi announced from Sharm Al Sheikh where the Arab Summit was held to support the Saudi Aggression and to cover it that Eilat will no longer be target of the missiles fired from Al Hodeidah and threaten the security of Israel in any war to come. Now the war is in its fifth year, the dreams of the Saudi Crown Prince are as the promises of Mansour Hadi and his group and as the Deal of the Century and as the security of Eilat, because Al Hodeidah is still steadfast under the control of the Yemeni resisters, and the world which sold UN resolutions that cover the aggression to the Saudi rulers is searching for a settlement that announces the end of the Saudi era as an inevitable result of the failure of the war.

The Saudi rulers have succeeded in committing the greatest massacre in the history, the biggest famine, and the displacing of the largest number of inhabitants from children and women without shelter, food, or medicine, but they failed to win in the bet of the war which they waged five years ago thinking that it is a five-days war or five-weeks war. The heroes of Yemen and their courageous and wise leaderships succeeded in repeating what the heroes of Vietnam and their courageous leadership did in getting rid of the ugly brutal slavery that belongs to ignorance, darkness, and injustice. The Yemenis waged our war by proxy, as the House of Saud waged the war of the Americans, the Israelis, and the terrorism, but they were defeated and we won.

It is the beginning of the Yemeni era. 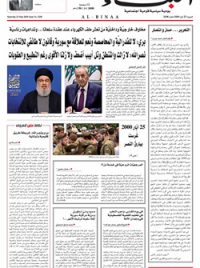