Since the American presence in the Gulf turned into an dormant force that is unable to make any events contrary to the active movement of the resistance forces represented in the operations of Ansar Allah which imposed their presence on the world oil markets, Washington felt that the initiative was moving to the hands of the resistance forces despite the American sanctions, threats, and mobilization which were thought by Washington and its allies to be enough to keep the initiative, but Iran was seeking to avoid the military response to the sanctions, so it tried to escalate gradually in its nuclear program in order to put the Europeans in front of difficult options including ending the nuclear commitment. Therefore the Gulf arena seemed free for the Americans and their allies but they were surprised by bombing oil tankers in the Emirati Fujairah Port and the announced attack of Ansar Allah which targeted Aramco pipeline that links the east of Saudi Arabia with its west and secures an alternative crossing to Hormuz Strait to pump oil across the Red Sea.

The Israeli raids which targeted sites in the south of Damascus and in Quneitra were signs of Washington’ intention to destabilize the situation in Syria in order to make a balance in the rules of engagement. When Al Nusra front accused the Syrian Army of using the chemical weapons in one of the villages of Lattakia’s countryside, the Syrian government hastened to deny that because the source of accusation is Al Nusra front. That denial seemed as a result of the realization that this game is under the coordination of Washington. After the escalation took place in the Gulf, the US State Department announced in a formal statement what it has already announced in similar occasions just in order to justify the military intervention by indicating that it has serious intentions of the usage of the chemical weapons by the Syrian army.

Apart from many positions and analyses which talked about the rocket which targeted the Green Zone in Baghdad near the US embassy, it seemed that that the rocket was a pre-emptive sign to open the issue of the American presence in Iraq if Washington tried to intervene militarily in Syria as the missiles which already targeted Syrian sites. Perhaps, in the coming days we will witness something similar that opens the issue of the American presence in Syria, in a way that puts the game of balance of arenas into an advanced escalation level and puts in return America among difficult options either to respect the rules of engagement which rule the ongoing battles in Syria between the Syrian army and the terrorist groups or to engage in these battles beside the terrorist groups. This means to accelerate the demand of the US withdrawal along with actions that may not remain political.

From their previous experiences, the Americans are aware of the balances that rule the equations in Syria and aware that the attempts to neutralize the Russian role have been failed repeatedly, and that a crucial battle is taking place against the armed groups under Syrian-Russian-Iranian partnership and some kind of the implicit coordination with Turkey. Therefore, Washington has no interest in waging an open battle against this quartet with which it has relations of hostility and tension especially after the Russian words which accuse Washington of dispersing the recent Sochi understandings through its reckless behavior in the region.

The region is on a hot tin and the opposed concerned parties try to avoid the war, but the reckless behaviors may break it out. The resistance axis is no longer behaving as allied groups, rather as an axis according to the speech of Al Sayyed Hassan Nasrallah. Therefore, the Americans and the Israelis have to take these words seriously in order to keep everything under control, but if they decide to go to war, the resistance axis will reply “we do not want war, and we will not hasten to it, but if is imposed on us we will not be afraid and we will turn it from a challenge into an opportunity”. 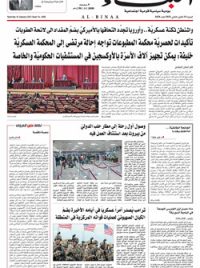