Written by Nasser Kandil,
The American President Donald Trump and the Turkish President Recep Erdogan depend on each other in adjusting balances and in evading from the entitlements. But it seems that none of them is ready to pay the cost of the confrontation necessary to achieve that, so maneuvers replace actual confrontations, and the military and political plans turn into attempts to gain time. Both of them are facing difficult electoral entitlement. Although the world has been distracted from the results of the local elections of America and Turkey, but the two men felt discontent regarding the next presidential elections which will be held in America after months and which may be held before its scheduled date after three years. The Turkish opposition has recovered since its winning in the municipality of Istanbul in the past summer and the Republic Party is worried about the indicators of the winning of the Democrats in the past fall in the states of Virginia and Kentucky which are known for their traditional loyal to the Republicans.
The Turkish and the American internal situations are well considered by the two presidents who are under the pressure of imminent entitlements of confrontations and well considered by the opponents particularly Russia and Iran, where the two regimes renew their strength and their control on the situations of the two pivotal countries in drawing the path of confrontations, since the war in which Washington and Ankara cooperated to overthrow Syria has been turned into a start of a qualitative Russian-Iranian cooperation. This cooperation has succeeded in turning balances and in re-taking the initiative in drawing the maps of the region which the Democratic and the Republican Americans say that they determine the fate of the American power and leadership.
Contrary to the state of the American apparent coherence behind the leadership of Trump and the parallel Turkish state, it seems that the political vitality to put the policies of the two reckless men under accountability is at its peak, where the present youth elites behold them the responsibility of the decline of the two countries and the decrease of its value level. Moreover, the issues that were forbidden to be discussed as the Israeli-American relationship and the Turkish-Muslim Brotherhood relationship have become at the forefront of the national debate issues. Some consider that these relationships are the source of the successive humiliation to the two countries and the reason of their decline. Therefore, this discourse got unexpected admiration. The social media which has broken the monopoly of media and was the source of the chaos spread in the Middle East has led to similar qualitative changes in the perspectives that were premises before in America and Turkey.
When the leader of the Turkish opposition Kemal Kılıçdaraoglu stood on the pulpit of the Turkish parliament talking about Erdogan’s policies by linking the fate of Turkey with the fate of the criminal party (Muslim Brotherhood) as he described it, and considered Erdogan’s wars as wars by proxy on behalf of the Muslim Brotherhood in favor of Turkey. And when Bernie Sanders the democratic candidate who has the support of many States and who surpasses his rivalries, accused Trump of waging battles as Benjamin Netanyahu by making use of America and its moral status for this purpose. And when the opinion polls gave each of Erdogan and Trump less than 40% of the support of their citizens to their foreign policies, and when these polls showed that the economic policies of Erdogan have failed in reviving the economy, moreover, when most of Sanders followers explained their support to him due to his political plan which is described as socialism by his opponents then expecting surprises become a necessary.
Moscow and Tehran observe closely the American and the Turkish internal situations, they see them a reason for the confusion in the policies of the two presidents, and the disability to get engaged in major confrontations at the same time. Because it seems that the Russian resolution in Syria and the Iranian determination in the region are the interpretation of this reading, where the lifeline of Erdogan in Turkey has become Russian and the lifeline of Trump in America has become Iranian.
Translated by Lina Shehadeh, 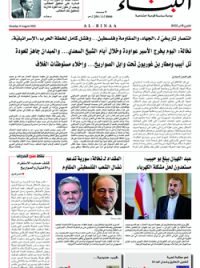