Those who said that the war is not over yet and will not end mean something else, which is known and accepted by everyone. They mean that what has been achieved in Aleppo by the Syrian country does not represent a shift in the course of the war, and does not draw the future of what will happen in other areas than Aleppo, but they intend to advise the supporters of the Syrian county not to exaggerate in their happiness regarding  the victory of Aleppo, because what is coming is greater, and that the most important rounds of the war have not occurred yet, and that the privacy of Aleppo and its battle makes its victory special that cannot be applied on others, because the war outside it will be different in the track and in the fate, so is it true?

Simple return to the nearby memory is useful, those who made the slogan “Aleppo resolves the war” are those who refuse to accept it today, they have said that at the most important Arab and foreign satellite channels which they operate, they have said that at the pulpits of politics and diplomacy and in the official statements. Many months ago the suggested solution for Aleppo by Russia and which got the acceptance of Syria, and which led later to the US Russian understanding after months of negotiation was based on dismantling the relation of the opposition which is adopted by Washington and its allies from Al Nusra Front,  and then the opposition which they sympathize with it today and which they called it moderate will join the political track in Geneva including the repercussions of the items of the truce by normalizing the fronts and calming them down, paving the way for the passage of the supply convoys, but after refusing this solution, the military solution was the choice; termination. The first message was by recapturing AlKastelo crossing, but the response from the armed groups supported by Washington, Ankara, and Riyadh was the attack of Ramouseh, after recapturing Al Ramouseh some of them attacked Al-Assad suburb, but when they failed and the siege started, they remained betting on the war and say that we will not accept the political solution which based on separating the factions between terrorists and opposition, and thus was the resolving.

Their bet was since Aleppo is a second capital so the dominance on it gives them a symbolism that is not granted by any other area as a historical economic capital, and what is granted by the geography of its eastern countryside for fighting is not granted by any other area for confronting the Syrian army and the allies, where the narrow alleys and the constructional overcrowding ensure the stopping of the aviation and the heavy machinery, moreover, the population ensures the facilitation of making use of the humanitarian issue. The title of the opposition factions ensures an opportunity that is not available in any other front where Al Nusra front ad ISIS were classified as terrorists, and their support embarrasses any country among those which stood behind the war of Aleppo. The talk about special circumstances that grant the war of Aleppo privacy is so true, but it is true reversely regarding what they are talking about it today. The victory in Aleppo will be applied on other areas because despite the availability of the conditions on which they could build their hopes in Aleppo they were defeated.

Aleppo does not end the war, and it will not end it, but it draws the track of post-Aleppo, because what has happened in Aleppo will be repeated rapidly and powerfully outside it, if the intention was that “the war ends in Aleppo” by virtue of drawing its track and the resolving of its future, then yes it can be said that Aleppo ends the war and that the war in Aleppo has ended, but what is left is a matter of time, there is nothing can be done more than what has been done in Aleppo, and despite all of that the victory was decisive,  so how can it be in other areas? 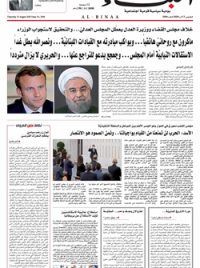