Since the end of the first hundred days of the term of the US President Donald Trump the US escalation scenes  have been integrated, so this drove some people to conclude that a new stage in the confrontations are awaiting the region, but the  checking in the content of the US escalating steps  indicates to a hidden equation between them. All of which were available for the previous administration but they were with dead end, and without future that changes the balances of forces, and a wasting of time and effort, so it committed to read the ends in more rational way and upon them it decided to go to the negotiation without Hollywood adventures which their consequences are well known, it expressed the bankruptcy and the inability. Therefore this led to the progress of the opposite axis seriously in the fields of confrontation and it was obliged to negotiate with it from a weaker position.

The sanctions on Iran were an offer presented by Benjamin Netanyahu to the former US President Barack Obama instead of signing the nuclear understanding, the response of Obama was what is after, a return to negotiation after Iran has made a great progress in its nuclear program, and an acceptance of more difficult terms in understating for the benefit of Iran. As the sanctions were always present on the US table, there were Saudi projects for the escalation in Yemen and Bahrain, many of which were given the red light hoping to win fronts and battlefields, when the ruling balances of confrontation have become apparent and after every escalation has become mere temporal profit that leads to more confrontation and to more difficult and dangerous areas the light becomes yellow.

Observing the US escalation arenas in the era of Donald Trump refers to the consequences of giving the green light to Saudi Arabia to adopt bloody excessive behavior in the eastern region under sectarian titles that will lead to civil war that is out of control. While the adoption  of the savagery in Bahrain as happened since the announced speech of Trump to the King of Bahrain in Riyadh summit that the matters between us will be better from now on, which means we will neither consider the organizations of human rights, nor the press, nor the public opinion, will legalized him and the Saudi regime to commit open massacres in Bahrain, and this will produce illusions of victories, but at the same time it will lead the popular uprising to the armed confrontation which wants only the decision for the ignition of Bahrain, and to make the future of its regime in danger whatever the Americans and the Saudis mobilize for it.

In the Syrian and the Iraqi Badia, the Americans did what they could as Hollywood signs to draw red lines which were always available at the era Barack Obama, as the raid of Tanf, or the strike of Shuairat Airport. But the result now is no one cares about Trump’s red lines since the sites of his allies are fallen in favor of the Syrian army and its allies which expanded within a month in the Badia in five thousands kilometer square, as the popular crowd did in Iraq. So the Americans found themselves once again in front of the difficult choices,; either to leave their allies falling or to move to a war that is out of control. In both cases there are losses and a return to negotiation from the position of weakness.

The former US diplomats in the groups of thought in the studies centers that discuss the situations in Homs, Aleppo, and Hama ask what would be the situation if the Americans have decided and have imposed the acceptance on their allies of a settlement with Russia, Syria, and Iran before the fall of the sites of the armed groups in these areas, according to what was stated in the understanding which made by the Secretary of State at that time John Kerry with his Russian counterpart Sergei Lavrov, the answer is that the Americans will recognize later the gratitude made by the administration of Obama by going to have understanding on the nuclear program with Iran, not paying attention to Netanyahu’s advice which it seemed that Trump is inclined to it if he was the negotiator. The remorse will be great for the steps of the risk of escalation, by ignoring the opportunities of settlements and taking the region into escalation, while there is no war decision as the size of changing the balances.

The US President does not care about the far future of his country, but to overcome temporarily the embarrassments and the crises in the stage of his era even through buying time, and inheriting the crises for ancestors. The more the internal image of the president is getting confused, the more the need for buying time as gamblers becomes apparent as a way for ruling. This is what is done by Trump in politics, war, and economy. 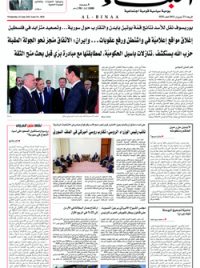