The continuous bleeding of the Egyptian Copts as a free inbox for which the terrorist groups supported by Turkey and Qatar, and which are divided between Muslim Brotherhood and ISIS resort coincides with a harsh repulsive campaign launched by Saudi newspapers Okaz against the Lebanese President Michael Aoun and the Foreign Minister Gibran Bassil through harmful improper words and disgraceful descriptions on the basis of polite decent words and a compromised behavior for which the President and the Minister resorted to prevent the collision with Saudi Arabia. The President accepted to overlook the violation of the assets of communication between countries through sending an invitation to the Prime Minister to attend Riyadh summit, so the President and the Minister agreed upon a ceiling for the objection of the summit statement that does not bother Saudi Arabia or affect its prestige.

For a moment it seemed that the Christians of the East have been turned into a source for revenge for the countries that sponsor the formations that perfect the murder and the kill on all over the world, so to know their criminal record it is enough to hear what they say against each other on the front of their major newspapers and at their giant satellite channels which are dedicated these days to show the mutual terrorist accusation. It is enough to recall what the US President said about them in his electoral campaign while they celebrated his coming. These countries would not dare to assault those whom they considered under the Western protection without a green light from the West, or the feeling of the removal of the red line which was drawn to protect that presence. These sponsoring countries of terrorism are living under the Western protection and working in conformity with the US agenda and orders.

Tampering with the blood of the Christians of Egypt to send a message to its President, and to be insolent against the president of Lebanon to show him resentment are two new phenomena. At the highest clash with the President Emile Lahhoud the Saudi press reserved from saying a similar statement to what was said against the President Michael Aoun, and at the highest clash with the Egyptian President Hosni Mubarak the Qataris, the Saudis, and the Turkish were fear to adopt and to protect armed groups that play with the blood of the Egyptians, the considerations by everyone towards the presidency in Lebanon and the Copts in Egypt were well considered according to the position which the Christians of the East, whom have the population as the Copts of Egypt, and whom have the political position as the Lebanese President have in the West.

There is a qualitative transition that surpasses the adoption of narrow sectarian equations; this transition finds it easy to resort to a boxing bag presented by the Christians of the East. The rehabilitation cannot be neither with wisdom nor with the accounts of the narrow electoral interests, nor with the soft administration of politics, because there is a scream that must be responded by Stop, tell your group that this playing does not work with us, this harm must not pass without expense. The Christians of the East do not sell their dignity and their moral presence by promises of tourist season to Egypt or to Lebanon. it is a speech that may be useful for the Lebanese President to say from the rostrum of the Coptic Church in urgent personal historic condolences of the victims of the massacres to reach to those who ordered of killing in Al Minya in the desert road, and those who ordered to write cheap articles with cheaper pens, or that who ordered from beyond the oceans, the racist who has sold his silence with a bag of money and gold. 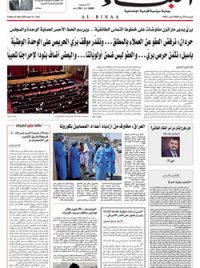