Throughout the past six years the Turks were the most present on the arena of the Syrian war among their allies including the countries that ignite that war for which there were facades that hide faces and reveal other faces. The American who does not appear but only when the title of the war on terrorism became an appropriate umbrella, preserves for himself a well-considered role that is open on escalation and the settlements together since he withdrew his fleets from the Mediterranean Sea, dismissing of getting involved in a war that he knows when it starts but he does not know when it will end,  leaving his allies As Israel And Saudi Arabia which have interest in waging the war according to an existential equation, and in manipulating as Turkey in order to dedicate the positive outcome of all of them into his account while putting the negative outcome for each one of them on its own account as a debt, therefore the American hides behind the Turkish Saudi Israeli tripartite.

This tripartite which brought Al-Qaeda organization in its two versions, distributed it on the fronts, funded, armed, controlled its movement, feared its coup, and wants to use it, knows that the dealing with Al-Qaeda is unprofitable in politics even if it considered it its only investment in the field with fragile Syrian opposition that cannot withstand in the warfare in front of the Syrian army and its allies, it made of Al-Qaeda a mask that it hides behind and it made for Al-Qaeda a mask in order to hide the opposition. One of the signs of entering in the last quarter of the war is that the big players have participated directly in the battlefield because the masks were fallen and the battle is delicate where there is no place for a mistake, and there is no bet on the secondary players in the big considerations. Al-Qaeda which was hidden behind the formations of the opposition by the operators has become publicly the party which fights. Now the battles of Daraa, Qaboun, and Jobar in the northern of Damascus are announced through formal statements by Al Nusra front and Alrahman corps. In contrast now Israel is bombing publicly sites that belong to the Syrian army and its allies in the eastern of Palmyra after the fall of the lie of destroying missiles convoys there.

The Israeli military movement wants to obstruct the Syrian army from having control on the southern bank of the Euphrates River, which half of its northern bank is under the control of ISIS and the other half is anticipated by ISIS, the Kurds, and he Syrian army from the direction of Hasaka, and Dei Al Zour . The goal of the Israeli obstruction by hitting the front of the Syrian army which reached to the Euphrates is to grant time in order to meet the groups of the opposition  that were trained by Israel and which enter from the Jordanian , Syrian, and Iraqi borders, they were already tested by the Americans in Tanaf battles on the Syrian-Iraqi borders but they failed. It is supposed that they reach across the Desert to the Euphrates River and meet the Kurds from Hasaka under US orders. Therefore the Syrian army will not be able to reach Deir Al Zour through this connection from Tanaf to Euphrates due to the presence of the groups led by the Americans and the Israelis; they try to overthrow the equation of the triangle which was achieved by the Syrian army between Tadef, Palmyra, and Deir Al Zour.

The Israeli failure due to the Syrian stunning response and its level which made the confrontation at a higher strategic level than the expectations of the leaders of the government of Benjamin Netanyahu, in addition to the Russian reaction toward the Israeli raids have put the Israeli movement in a narrow position that raises the degree of challenge and puts the Russian-US relationship in a test that prevents any opportunity for any Israeli forthcoming role in the Syrian airspace. America has enabled Israel to implement the task and has given it the keys to enter to the Syrian airspace by following its jets at the same timing of the US raid in the western of Aleppo on the sites of Al-Qaeda organization. The point is that what has been started for tactic service for a party of a war in which Israel entered has become at the level of determining the presence of the Israeli in the Syrian equation, so this provokes the Saudi intervention directly and thus Al Nusra front ignited the confrontations in Damascus to prevent the Israeli hesitation and to ensure the ability to move and to prove that the American is capable of changing the equations to continue what the Israeli has done from the position of the partner in the field, moreover  to convince the American during the visit of Mohammed Bin Salman to Washington to grant time to the Saudi and the Israeli bilateral to lead the war of the southern of Syria against the Syrian country and its allies and away from the equations of the cooperation with the Russians and the equations of the agreement and the disagreement with the Turks in the northern of Syria.

The symbols of the Saudi media and the leaders of the negotiating delegation of Riyadh’s group do not hide that the bombing has been carried out by Al Nusra and that the force of Alrahman corps is leading the fight on the other front, and that the opposition is just for the talk. They do not hide that the timing of the explosion is related to the seeking to prevent the Syrian army from reaping the fruits of the war missile with the Israeli.

The confrontation is public; Israel versus Syria face-to-face and the rest are secondary players. 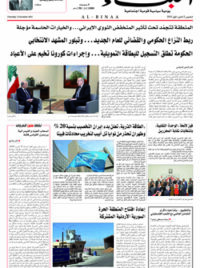