In the corridors of the United Nations there are teams that are formed to take over the responsibility of studying hypothetical issues, however it cannot be imagined to waste time on them unjustifiably, there is a workshop to deploy the international blue-helmets troops in Bab Al Mandab to ensure the freedom of navigation, that coincides with a hypothetical study for the UN negotiations that include the sharing of gas in the water of the Mediterranean Sea between Lebanon and Israel, as well as deploying international enhanced units that ensure the security and the safety of energy’s  corridors and its pipelines, along with a third workshop for arranging the draft of UN resolution to expand and to activate the units of observers in Golan and to turn  them into a separating force, its task is similar to the task of UNIFEL in the South of Lebanon according to what the effects of the resolution 1701 contain. In the Northern of Syria and Iraq there is a separated workshop that searches to deploy international units at the connection and the separation points between the Kurds and Turkmen, their mission as the title of the nomination of the open workshop “the verification of non-discrimination against the minorities”.

On a parallel bank there are preparations for other workshops that are interested in what they called the preparations of ceasing-fire in Syria and Yemen, such as bodies for the control and the supervision of the electoral processes in each of Syria and Yemen, according to what the projects of settlements have included. There are other workshops that are led by the Under–Secretary–General for Legal Affairs and United Nations Legal Counsel the Swiss Nicolas Michel, the mission of these workshops is to prepare the proposals and the necessary legal archive  for the formulation of the proposed serious drafts of constitutions for each of Syria and Yemen and maybe Iraq and Palestine as the corridors show, while the Norwegian Jan Egeland will  take over the responsibility of observing ceasing –fire, and the German Volker Perthes has been chosen to work on  the semi-military tasks.

This UN effort cannot be completed without a plan or a perception, at least with an American satisfaction, because there are many sidelines which the UN teams are interested in and which depend on the balances which the fields of confrontation draw, thus the task of ceasing-fire and observing it changes when the military balance among the fighters is present and vice versa if there is  a winner and a defeated, moreover the tasks of the teams that are concerned with elections and constitutions can change from secretariat to trusteeship according to the strong or the weak presence of the country which is concerned in its sovereignty in determining the sidelines of the UN mission, but giving the settlements the aspect of the UN seems that it is an American roadmap to compensate many loses which the allies of Washington have got in the fields of confrontations.

The Israeli process which targeted the martyr Samir Al-Kuntar is not far from luring the fronts of the Southern of Lebanon and the Syrian Golan to the tests of internationalization, however the response of the resistance will determine the extent of the ability of Israel followed by Washington in drawing a broad sideline for internationalization in all the fronts, which will compensate some of the loses or will impose narrowing it to the maximum and canceling it since it is an invented addition, thus the process of getting rid of the Turkish and Saudi groups from the Syrian field is not separated from the concept of the actual  response for the assassination of Al-Kuntar, but disabling the invented assumptions of the internationalization by deploying observers,  which De Mistura and his aides were seeing that Al Ghouta of Damascus is its assumptive arena. 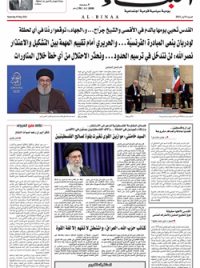