The commentator who is known for his focus on the Arabs affairs in the “Walla ” site, Avi Issacharoff remarked that the series of the recent developments in the war between the Syrian army and the militants indicates that the relative comfort which Israel was interested from the northern front is getting reduced, in other words, the defeat of ISIS is foreshadowing of probable escalation in the north between Israel and the Syrian army and surely Hezbollah. Issacharoff added that what he called as the last years of the Syrian war have driven Hezbollah to restrict its resources and its capacities for a confrontation with Israel. But in the recent weeks it seemed that this behavior has been changed and the balance has become in favor of the soldiers of the President Bashar Al-Assad, Hezbollah, and Iran. The battles in Mosul in Iraq are getting closer from the end, and it is clear that Raqqa the capital of ISIS in Syria will be the next battle. The Syrian army has achieved notable successes as in Deir Al-Zour in the northern of Syria. Avi Issacharoff indicates that what he called as the different military militias whether those who support Al-Assad or the militants are racing in order to reach the areas from which ISIS withdraws, including the areas which worry Israel more than anything and worry its neighbor from the east Jordan, indicating in this context to the battles which are taking place in Daraa and in the Syrian Golan

While Avi Issacharoff was talking about reflective shells against Israel from time to time, he excluded that there is an intended Syrian shooting, considering that the main Israeli fear is not from sending mortar bombs, however “the most important threat” according to the description of Issacharoff and which its source is the approaching of the allies of the President Al-Assad from the borders with Jordan and the Occupied Palestine. He revealed that there is a coordination with Jordan, but he pointed out that that it is doubtful whether this coordination can prevent or stop what he called the forces supported by Iran specially Hezbollah and its allies of Pakistani, Iraqi, or Afghani origins from approaching the borders with the Israeli entity, adding that what he called as the axis of Hezbollah is progressing while ISIS in no longer exist in this region, concluding that informal Israeli behavior which says” we wish success to the two parties” has become less relevant to the reality after the important successes of one of the parties.

Avi Issacharoff concluded that “the reflection of these successes in Syria and Iraq can be seen and heard in the recent days in Lebanon through the enthusiastic declarations of the Secretary-General of Hezbollah Al Sayyed Hassan Nasrollah who has promised that in the next war with Israel, the airspaces will be open in front of thousands and maybe hundreds of thousands of fighters from all the Arab and the Islamic countries to participate.

Avi Issacharoff is the Middle East analyst for The Times of Israel. Many radio and TV shows host him as a commenter on the Middle East affairs, until 2012, he was the Palestinian and Arab affairs correspondent for the Israeli newspaper Haaretz, moreover, he is a lecturer in the contemporary Palestinian history at Tel Aviv University, he got a bachelor degree with excellence from Ben-Gurion University in the sciences of the Middle East, and got MA from Tel Aviv University in the same subject. He is fluent in Arabic; he is considered the closest analyst to express the military and the security concern and put it to circulation before public opinion. He occupied the position cherished by the famous analyst Ze’ev Schiff until his departure in 2006. His two books which won Israeli awards are “The Seventh War” and “34 Days: Israel, Hezbollah, and the War in Lebanon” they are the most important references for reading the military and the strategic variables that surround Israel’s security.

When you read Issacharoff and listen to Al-Arabiya TV and when you re-read the Saudi campaign in the newspapers funded by Riyadh about the same subject, about what was called by Issacharoff as the echo of the major shifts which threaten the security of Israel entitled Hezbollah, through the words of Al Sayyed Hassan Nasrollah about opening the borders and the airspaces. And when Al Sayyed indicated in his speech to two major shifts that prove the threat, the position of the Popular Crowd and the status of Ansar Allah in the resistance axis, which means common axis with Hezbollah, because the two leaderships of the two teams issued a clear announcement to support Hezbollah in any forthcoming war, and surpassing the borders of the alliance in facing common dangers and the related fate. So after understanding all of that, we conclude that the campaign which targets Hezbollah and the words of Al Sayyed Nasrollah become understood as meeting a request or a decision which started as an Israeli and turned to be American and then it reached to Lebanon and we heard its echoes, but the words of the speech of Al Sayyed are clear, while according to them when the war takes place and if Israel makes an aggression, then there are no place for conditions because the issue becomes the sovereignty of Lebanon, as though, if the aggression occurs it will not affect the sovereignty, so the concern of the objectors is no longer to respond to the assault on sovereignty, but to restrict the confrontation with what does not disturb Israel or confuse it, or maybe it deters it under the pretext of sovereignty, so they volunteered to deter Hezbollah and that was their mission. 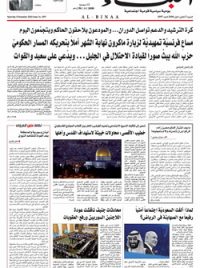