It is constant, that the current call for the negotiations that lead for a political settlement in Yemen differs from its previous ones; it is the first time that the Yemeni President who is a spokesman of Saudi Arabia and the coalition which the war has formed under the slogan of giving the capacities of Yemen to the President Mansour Hadi, has announced that the negotiations will be accomplished along with ceasing-fire. Despite all the media introduction that aims to show that the ceasing –fire is a request of Hadi and Saudi Arabia, and that the dispute over the political settlement is related to the terms of negotiation which is associated with the UN resolution 2216 or with the seven or ten points, every observer of the Yemeni issue knows that the political understanding has been achieved about these points in Muscat’s negotiations, and that the linking between the titles which each party wants to protect its perspective about the settlement has been accomplished for everyone in a relative satisfactory way, where the seven points are turned into an executive mechanism of the UN resolution, thus the forming of a unified government and the announcement of a unified leadership of the army are two steps that proceed giving the cities to the government, and giving the army, the government, and the new leadership are to the army by the UN resolution as in the seven points which Al-Houthis are stick to.

The issue basically was ceasing –fire, in other words stopping the war which Saudi Arabia is launching against Yemen, where Hadi proceeded by the Saudis were hoping of holding negotiations under fire, they have announced that publicly repeatedly, they have invented theories that Al-Houthis want to cease-fire as an escape of the military resolving, and that they are doing their best to make any negotiation fail, there is no negotiation while the war is continuous till they admit of accepting the application of the UN resolution before any political understanding, it means giving the cities to the government of Hadi and his army, which means the surrender to Saudi Arabia, while this time Hadi followed by the Saudis warn of the non-commitment of Al-Houthis of ceasing-fire, even they talk about procedures of trust that they wait for from Al-Houthis to present. Usually it is known that these are steps from one party, which the winning party or the strongest one in worst cases is presenting. This time ceasing-fire has strong lucks according to the context where the negotiations are coinciding with ceasing-fire and what is uttered by Hadi and the Saudis. The reason is not a secret; it is through the concentration of the Saudi speakers and those who support them of the Yemenis on the commitment of the Houthis of ceasing-fire on the Saudi Yemeni borders, which means that the change has started.

Despite the rush and the noise, Saudi Arabia has made acts not by coincidence, it has delivered the body of the Iranian diplomatic Ghazanfa Roknabadi who has died in the incident of Mona which has led to the death of hundreds of pilgrims and has caused of an Iranian Saudi crisis, after denying his presence for a long time between the living and dead even denying his arrival to Saudi Arabia. Yesterday the Saudi ambassador has returned to Tehran after he was recalled in protest of the position of Tehran toward the Saudi dealing with the disaster of Mona, On the other hand, and apart of the special aspects of the Lebanese presidential equation, Saudi Arabia has adopted the nomination of the Deputy Suleiman Franjieh for the presidency publicly and through the spokesman of its ambassador in Beirut, he is a liable ally of Hezbollah and Syria. Thus it is a message that is supposed that it has been read in Tehran, it is not possible to separate the Saudi positions toward Iran of those toward Yemen in particular.

The negotiations of Yemen will be held in Genève away from the lights which were designed to move them to other negotiations such as  the projects of the Libyan settlement which will not terminate a war which its other party is ISIS, but it will try to combine between the supported team by Saudi Arabia and the team supported by Turkey and Qatar to form a unified government, but the event will remain Yemen where the great regional dimension which will have the most prominent reference to the position and the size of the role of Saudi Arabia in the coming regional map on one hand, and the indicators of the Iranian-Saudi relationship on the other hand. Upon these two factors the scene of the new balances and trends between the confrontation and the settlements will depend.

It is Yemen and from which the break starts, and the directions will be determined by it. Since it is the most dangerous and the last wounds which was opened, it will be the first wounds which will be sewed, it seems that the alternative wound is Iraqi and its title is Turkey. So does Saudi Arabia has done well in making use of the Turkish smoke in Iraq to secure the redeployment of its exits of the failed desperate wars with less loses, after it has reached to the conviction of the futility of the continuation of  stubbornness? 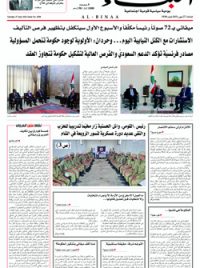