The first thing which could be imagined with the Arabsat’s decision of stopping the broadcasting of the Al-Manar TV on its satellites is that the resistance channel is facing a global war where the Zionists are standing behind, so they succeed in preventing the transferring the sound of the resistance to the world, and that the Arab satellites which are represented by Arabsat are the only transferor of this sound, thus the decision of Arabsat becomes a decision of a complete stopping of Al-Manar. So let us imagine the scene of the Arab media without Al-Manar, to recall the memories and the pauses since the birth till the license, the battles of Grapes of Wrath and the liberation, towards the aggression of July 2006, where in mind there is only one affected and one enemy that  does not want to see or to hear the name of Al-Manar which has previously targeted its bombs to uproot its studios, to chase its reporters and to destroy its antennas , it has targeted its lobbies to prevent its rebroadcasting across the world, so how can be if the supposed shelter becomes a treachery knife and a revenge tool for the account of the enemy?

We do not want to discuss who was behind this decision , and in favor of whom,  his objections and the magnitude of his dispute toward the policy of Al-Manar TV. In Yemen, Gulf, the region , and in Syria everything is known, Saudi Arabia is furious at Al-Manar, this is evident for many years ago, Yesterday it was furious at Al-Mayadeen, the reason is Palestine, but how could not the hand which signed the decision of stopping the broadcasting of Al-Manar tremble, and how could not be ashamed while it imagined the smile on Benjamin Netanyahu’s face the Head of the Occupation government and the pillars of his war, and how could not the one who issued the decision feel of shame, humiliation, and disgrace, and how could not the Lebanese who are boasting of him as a friend and as an ally shiver of fear, while they want to convince us that he is keen to Lebanon and the Lebanese?

At the period of licensing the TV and the radio channels, a debate has took place between me and the Prime Minister Rafik Al-Hariri, there was who said that Al-Manar is a channel that belongs to a party and has an ideological religious color, and an identity of particular doctrine that is not consistent with the license terms, after the debate it was concluded that the national networking which surrounds the resistance can grant Al-Manar what is enough to provide the license terms, but once we ask a question, do you imagine Lebanon without Al-Manar?, and do you imagine the smile which will be at the faces of Shimon Peres and Ariel Sharon if the Lebanese government did not lenience for Al-Manar TV, the decision was to tell to Al-Manar about what are the arrangements which must be followed to obtain  the license without being a temporary channel of resistance that works under a legal exception, but to become a full legal channel.

If Rafik Al-Hariri was still alive and there was this debate about the solutions and the settlements then he would consider that who stood behind this decision was a personal opponent to him, and that he wanted to blow up the settlement which Al-Hariri was working on it and wanted it to be succeeded. The message which the decision-maker of stopping the broadcasting of Al-Manar through Arabsat satellites wants to send is that Saudi Arabia is putting its priorities on the basis of the hostility towards the resistance, and that the Israeli happiness is not far of the Saudi decision, moreover this Saudi priority toward Lebanon is preceding all what is said about the settlements, so maybe it must be looked at the projects of settlements with suspicion that is made by this decision, and if this occurred then the Prime Minister Rafik Al-Hariri would travel to Riyadh to meet the decision-makers and would not come back only with the returning of Al-Manar, or the owners of hatred retreated of their deception  against Al-Manar.

The decision of stopping Al-Manar on Arabsite satellites is neither a contract nor a legal or a commercial account between two private sector companies, it is a Saudi message to the resistance, thus the Prime Minister Al-Hariri has to recall the positions of his father at such cases, and has to behave accordingly, if he wants to make the people believe him that Lebanon is at a new phase.

Al-Manar will remain available to its people even with or without Arabsat and its satellites, but Saudi Arabia whether it wants to convince or does not want to convince anyone with the seriousness and the credibility of its position toward the reconciliation among the Lebanese people, it will be according to its current position and the position of its Lebanese allies toward Al-Manar. 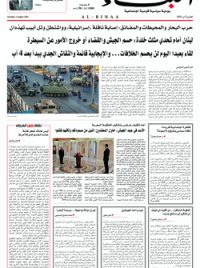