Whenever the Secretary-General of Hezbollah Al Sayyed Hassan Nasrollah talked about the battles of the eastern borderline between Lebanon and Syria, his Lebanese opponents recall the name of Arsal as a Lebanese town, which they wanted to employ the identify of its people in order to show it a target of Hezbollah and the resistance under sectarian considerations, and thus to turn it into a background that incubates the fighters who entered it according to old plan. Hezbollah knows as its opponents know that they belong to Al-Qaeda organization and they have no relation neither with the revolution nor with the rebels as was described by the Minister of Justice of Al Mustaqbal Movement the Major. General Ashraf Rifi. It is not hidden to Hezbollah or to its opponents that those “rebels” are themselves whom the Minister of the war of the enemy Moshe Ya’alon said at the same time that they are friends to Israel and that they are entrusted with its security and borders.

None of Hezbollah’s battles in Syria especially the battles of Al-Quseir and Kalamoun were separated from the exposure of Hezbollah to targeting with announced and clear strikes by the occupation army. These strikes have threat messages not to proceed in the choice of determination, Hezbollah’s endeavors to resolve were not separated also from the high chaos internally caused by its opponents who asked it to hand over its weapons in the war of July in 2006, every time under a plea, they were always trying to hinder it from resolving and prevent any serious action by the Lebanese army and the security services that aims to target the groups which Israel announced that it cured three thousands of their wounded for many years. So it is proven that the cause is the seeking to protect these groups despite the certainty of their relation with Israel and ensuring the cover to them under multi-titles, once by linking them with the Syrian refugees and the humanitarian dimension, and once with weapons and the identity of its bearers versus the sectarian identity of Arsal and the warning of sectarianism.

The war of Syria approaches of its end after the fall of the US bets on hampering the forces of the resistance from the lower ceiling which is the protection of Syria from falling, and from the higher ceiling which is the protection of Syria from the division and chaos. The US choices become limited, either to abandon the chaos project and reaching to the point of losing everything and the reaching of the men of resistance accompanied with the Syrian army to every spot of the Syrian geography or to accept the Russian proposal of handing over the areas under the domination of the militants voluntarily to the Syrian army, in this way they can avoid the expansion of Hezbollah’s deployment on one hand, and preserve a political role for the representatives of these groups from the gates of Astana and Geneva. But the concern of Washington and its allies is the security of Israel either by the attempt to link the settlement in Syria with guarantees and arrangements that are related to this security, or by imposing facts that are related to the siege of the resistance.

The timing of the battle of the eastern borderline is Lebanese in order to preserve the security of the capital from the bombers and the suicide bombers, but it is international, regional, and strategic, it is an acceleration of an agenda that precedes the negotiation and removes the pressing papers from the hands of opponents, therefore neither the Syrian-Lebanese borders will be an issue of negotiation, nor the Syrian-Iraqi borders, moreover those who pretend to be clever will not be given the opportunity to have time in order to prepare the circumstances and to talk about deploying international units  there, and linking them with the establishment of unarmed areas under the slogan of sheltering the displaced. Most importantly is to be prepared for what is coming in Palestine, because this may not give the opportunities to America to enjoy the settlements which the Palestinian developments may impose an escalation in tension that takes the region along with the resistance from the Jerusalem gate to another place. 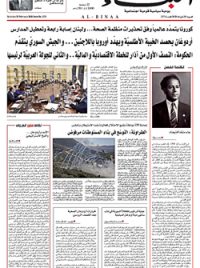