Every reader can check the foisted part in the speech attributed to the Prince of Qatar when he reads the section about the US President “who will not continue due to legal prosecutions and legal irregularities” this talk cannot be issued by a major country that announces the hostility to America, so how from a small country that at the end it is under the control of America and its rule is protected by US military base.

The Saudi intention through the media platforms funded and operated by Mohammed Bin Salman on refusing the Qatari speech about violating the website of the Official News Agency and foisting a statement at the mouthpiece of the Prince means a deliberate intention to engage. The intention on preparing media reports and distributing them under the responsibility of Qatar about the relationship with Al-Qaeda, Taliban, Al Nusra, ISIS, Hezbollah, Hamas, Muslim Brotherhood, and Iran is a part of a preliminary campaign for a work that is supposed it needs the cover of Gulf, Arab, and international public opinion, so Egypt, UAE, Bahrain, America, and Israel are partners in estimating this coverage every one for a special reason regarding what is attributed to Qatar.

The interpretation of the war on Iran at Riyadh summit is by overpower Qatar which forms a Turkish expansion in the Gulf and a source of traditional inconvenience to Saudi Arabia, so controlling the Saudi leadership by a young Prince as Mohammed Bin Salman requires a prestige that did not obtained by the war on Yemen, so it is supposed to have another war, and to put the Gulf as a pure dominance area of Saudi Arabia in confronting Iran. Qatar has a huge gas wealth and an active satellite channel, so getting angry from them due to the Qatari rule that belongs to Saudi Arabia is a qualitative adding financially and in media.

King Salman gave the US President what he wants as money, deals, and politics especially regarding the relationship with Israel, so Qatar no longer has what distinguishes it in this respect. When Saudi Arabia joins the normalization, Qatar becomes small issue. What the King wants is to stabilize his successor his son in power and to compensate the loss in Syria and the inability in Yemen so that is represented by Qatar.

Probably the Saudi intelligence has opened the activities of the center of the electronic war which is called by the combating extremism center “moderation” in the presence of the US President Donald Trump. Its first duties was hacking the website of the Qatari Official News Agency and publishing attributed speech to the Qatari Price when he was sleeping, the statement has been published at midnight, so it is a strange timing to publish such a speech to the Prince of Qatar before the morning. The goal is to postpone the Qatari negation to what has been published and to accuse Qatar as a result of the delay of publishing speech and claiming the hacking, after it saw the dangerous reactions. This is said by the Saudis and whom they bring to comment on that speech.

Three years ago, the Saudis try to get the US green light to resolve the position of Qatar, and to put it under the Saudi control, it seems that the opportunity has not come but through the visit of Trump to Riyadh and his bartering the attracting deals with the Qatari rule especially in the light of the Turkish-American dispute, the position of Qatar with Turkey, and the Egyptian pressure on Washington to control the Qatari performance in the issue of the Muslim Brotherhood. Trump intended to name Hamas Movement as a terrorist movement in his speech at the summit, while Qatar boasts because it succeeded in bringing Hamas to the settlements through a new document, and the presence of Saudi-US understanding to escalate against Iran, and to consider the cooperation with Iran in Astana Path and the bilateral relationships by Qatar a double dealing. The result was selling Qatar to Saudi Arabia for four billion dollars received by Trump who  has given the green light. 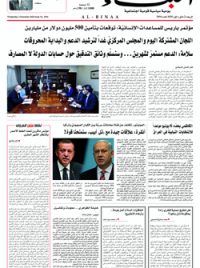