Any serious rational person does not need a proof to read the quality of the region’s entities, their governments, and the degree of their impact on drawing the international policies to make a conclusion, if Israel did have not a vital interest and a detailed control over the course of the war on Syria there would not be a war. Without America the Saudi desires and hatreds cannot tamper the maps of the sensitive area that affects all of the international and the regional balances. Without America the serious Ottoman dreams cannot lead to a war along with Saudi Arabia and Qatar, for which they bring ten thousands of the elements of Al-Qaeda organization and led to the change of the equations of the Middle East and the security rules in it. Without the US interest in filling the gap which will result from leaving Iraq and Afghanistan, America would not think of the war on Syria, but if the war was not an Israeli need and if Israel was not reassured that every detail can achieve its concept of the strategic security the war would not turn from a desire to a decision.

The formations of the political and the military opposition have been submitted to the Israeli checking as well as to the testing of their leaders, their official commanders, and their negotiators. The growth of the presence of extremist Islamist at their forefront the Wahhabi was to control those but under the Israeli ceiling. Moreover the Saudi progress from the security normalization to the public normalization with Israel as a precondition and the waging of Israel of the war of Yemen to destroy the ballistic missiles and the positioning in Hodeidah has been settled by Israeli request, otherwise it did not get the US approval, or else the Americans were not wait for three months to see the consequences of signing the understanding on the Iranian nuclear file. Those who want proofs have to stop in front of the meanings of the acts of the opposition formations by hitting the facilities of the electronic war in Syria and the eavesdropping centers at Israel in Daraa area on the first days of what they called “the revolution”, and to stop in front of targeting the networks of the air defense which were isolated in the mountains before what is so-called opposition, moreover to stop in front of the assassination of the leaders of the missiles warfare and their industry, and the aircraft officers who newly arrived from Russia for making courses on the new aircraft, towards the medical care and the sponsorship provided by Israel to Al-Qaeda organization and its militants, in addition to the announced statements about cooperating with it, and the boasting of the symbols of the opposition of their allied relation with Israel and their repeated visits to it.

The Israeli fiery support of the coordinated battles within the war on Syria which are waged by the formations of the armed groups under US sponsorship from the MOC in Jordan and in which Saudi Arabia and Jordan participate has formed an inherent feature of the battles of the southern of Syria between the Syrian army and the formations named opposition at their forefront Al Nusra front, towards the Israeli announcement of the intention to form a security strip on the borders of Golan handed over by Al Nusra, like the equation of Israel in the southern of Lebanon when it was unable to have control on the overall of Lebanon, but after the fall of the project of having control on Syria Israel has to anticipate for what is beyond the end of the war and to answer what is next?

The Israelis confirm at all the levels of decision and analysis that the next scene will consist of four parts; the US political involvement which started with the understanding on the Iranian nuclear file and which will continue in breaking up the crises even in a winding way, the war on terrorism as an alternative of the war on Syria according to the challenges and the surrounding changes of the war and which are taking place in America and the west, the intense Russian presence in Syria as a strategic base that has the interest and the sponsorship, and the presence of coherent Syrian military force that has tested all the kinds of fight and threats of wars and has acquired immunity and solidness with the integration of the transformation of the qualitative force of Hezbollah into new force that perfects the arts of regular and semi-regular fight and the possession of fighting expertise in coordination with the air force, the armored-clad, the formations of the armies, and the wars of the cities and the rural areas, so the outbreak of  a war that leads to disabling the settlements’ prospects is an existential catastrophe to Israel.

The Israeli experts consider that the risk of such a war has made them in 2012 demand from the Americans to accelerate the thinking of how to change the regime in Syria, but they say today that the situation which they will inherit from the failed war on Syria will make the risks of 2010 mere ordinary comparing with the risks of 2020. Russia is now drawing the borders of the map and forming a ceiling for it. The capacities of Iran have been doubled, each day it has a new weapon from the ballistic missiles, tanks, and aircraft. The Syrian army and Hezbollah are growing superpower and the first army of the ground wars in the Middle East, but according to the concept of engagement the US decision to ask for the cooperation with Russia in the war on terrorism will mean one thing no matter how long, the setting afloat of the Syrian country sooner or later as the Iranian country has been set afloat by the understanding on the Iranian nuclear file.

Israel has drawn its strategy on the basis of slowing down the US movement toward a political settlement in Syria. It sent Mohammed Bin Salman and the suicide bombers of Damascus to say to Washington that the war of the north on ISIS is something that depends of its alliances and disputes, while the war of the south is something else it is your war, and that our war on the Iranian influence must not stop under the pretext of facilitating the war of the north. In contrast Benjamin Netanyahu went to Moscow to anticipate the forthcoming Russian timing and to gain margins of the military movement in Syria according to the equation of what we do not do today, will not be done tomorrow by us, and when he presented his intentions in front of the Russian President to dismiss the military tampering inside Syria and the investment on the equation that the treating with the country of his enemy that is governed by controls remains the best for the concept of the strategic security from the tampering in chaos which grants circumstantial  profits but it grants the irregular forces strategic gains to change the situations because they do not need but only for the time and the legitimacy of move, this is granted by Israeli tampering in the southern of Syria to Hezbollah, Netanyahu did not want to negotiate with Moscow but to be sufficient that he informed it, this is Israel and it is enough to do so.

Netanyahu returned and the preparations started to target Hezbollah in the southern of Syria. There was a necessary to test the results of Moscow’s visit and the extent of the ability of the Syrian army of repeating the dealing with the entry of the Israeli jets to the Syrian airspaces by launching advanced missiles at these jets, as happened four months ago and has obliged Israel to narrow their margins by resorting to the raids from the Lebanese airspaces to the extent of sixty kilometers, and launching missiles from the occupied territories with approximately the same range. Therefore the Israeli incursion in the Syrian airspaces has been coincided with the implementation of the US aircraft a raid on the sites of Al –Qaeda organization in the western of Aleppo by using planes from the base of the King Khaled in Saudi Arabia. It is known that the path over Jordan requires notifying the Israeli media after getting the approval of the Russians to pass safely in the Syrian airspaces, and it is known also that the US-Israeli- Jordanian-Saudi cooperation does not need proofs, nothing prevents that the US raid has been timed on the Israeli time, that the Israeli jets uses the same air corridor which is followed by the US aircraft and at the same time.

The most important in the test is the results. The Israeli statements reveal that what have been fallen in the villages of Irbid are the remains of the Arrow missile which was prosecuting the Syrian missiles which targeted the participated aircraft in the raid, this confirms that the path of the Israeli jets was over Jordan not over Lebanon. What Israel has announced is that the Arrow missile has failed in dropping the Syrian missiles which reached to the airspace of Jerusalem and Jericho and have fallen there by the US Patriot network, which means that the Arrow missile on which Israel depends in the Iron dome has been stopped from service and that the Syrian missiles have been launched from the vicinity of Homs. It seems that they were four missiles, two of them have targeted the attacker jets, and two of them have prosecuted the two protection jet planes, they reached to Jerusalem airspace, which means that their range has reached to five hundred kilometers, this makes them among the most modern types, What Israel has said to reduce the fear is that they were SAM 5 missiles, it is a manipulating in the words because SS300 is of the kind of SAM 5 as well as SS400 this means that what the Israeli experts have said on the TV networks and the Israeli press that the time of the Israeli air superiority is over is the most important.

The long term conclusions are that Israel which lost the ground and the sea superiority is losing the air superiority now, and that Russia which is in the heart of the war will not grant Israel guarantees for moving in the Syrian airspaces, and the Syrian leadership has the will and the ability to confuse Israel strategically and make a country that is unable to think in a war even limited without taking the adventure in a confrontation that is out of control.

Israel recognizes all of that, so it does not mind if tomorrow some of the Arabs including Syrians and Lebanese people grant Israel a majeure force in the war and an international political influence from America to Russia that it desires but it cannot reach, as has happened after the Israeli defeat in the war of July 2006 where Fouad Al Siniora was an adjective not a person.

Those who will ask after today where is the right of response let them keep silent. 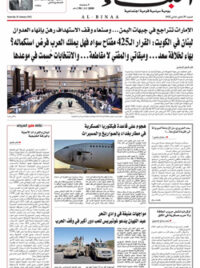