Washington seems heading towards a state of “coma” in making settlements for the hot files. It seemed clearly that there was a disability in solving them militarily and their integration with the file of the war on terrorism. Washington’s settlements have got complicated regarding the regional involvement of Washington’s allies and their allies in local arenas at one bank with the terrorist organizations. The matters have reached the limit where the proceeding once again towards the settlements depends on what was agreed upon between Moscow and Washington. The administration of the former President Barack Obama was unable to implement the separation of the armed groups affiliated to Washington and its allies from the terrorist organizations and to indulge them in settlements with the local forces which oppose the terrorism in order to form a local front supported by a regional front and sponsored by a global front for the war on terrorism. Because the regional and the international equations were disabled due to the US prolonged inability with the weakness of the new President Donald Trump to overcome the obstacles which were set by the US security intelligence military and diplomatic institution in front of him in order to achieve his electoral promises of the cooperation with Russia, the opposite international party which is able to make settlements on one hand, and because the regional policies which are represented by each of Turkey and Saudi Arabia  as a result of being allied with Washington  keep them away from making settlement which Iran forms its opposite party which is capable on the other hand, the description of the situation which is based on chaos and vacancy becomes the natural result.

The terrorist formations which started to settle strategies to react to the danger during the US-Russian understanding in the last summer have entered more difficult stage with the Turkish repositioning and the start of Astana path, the result was that Al Nusra front have launched a war of abolition against the participated armed factions in Astana path, and was the wining of Donald Trump and his raising the slogan of the priority of the war on terrorism and the abandonment of the polices of his predecessors of changing the regimes by force. All of that made the terrorist formations realize that the time of manipulating with the local equations in the used arenas and the employment of the local forces to make use of their sites and their internal wars has ended. But after it became clear the fragility of the tracks which are awaiting the settlements the terrorism was reassured, it started to behave under the US stagnation and the loss of opportunities of the major understandings, and under the regression of the Turkish repositioning and the progress of Saudi Arabia to meet this regression to escalate the tension against Iran. Thus the current scene seems with the inability of Turkey and Saudi Arabia and their allies to draw variables in the field without betting on the terrorism and wasting the interludes, that the terrorism is taking the lead to be capable alone of drawing clear plans that are able to make use of all these chaos and vacancy.

The forces of the resistance axis supported by Russia after they granted the opportunities of the settlements everything needed, are unable to mortgage their fate and the fate of the security of their countries, waiting for a coincidence or a strike that leads to the clarity of the US position or aspires Washington’s allies to go positively towards making settlements, and leaving the terrorism drawing the equations in the field. What happened in Homs and what is going on through the engagements which are led by Al Nusra front in many areas of Syria, as well as the return to the escalation in Yemen, and the bets of ISIS on moving to the south to Deir Al Zour towards Al Badiya on the Syrian-Iraqi-Saudi-Jordanian borders say that the confrontation of the challenges requires an estimation of the situation that reaches to the conviction of the impossibility of betting on settlements  in the current circumstances, and the return to what was before Aleppo’s battle to make achievements in the field that only draw what is after them, whether  more battles or opening the door for more settlements once again. 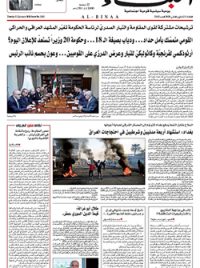