It is necessary for the Kurdish leadership in Syria to stop carefully in front of the variables which experienced by the war and in which it is a party, since it derived an additional importance and strength for its own project from the growing size of its participation with America in the title of this war; to eliminate ISIS. If the Kurdish leadership is aware that the privacy which it wants to get in Syria is fluctuating between the Syrian and the Turkish positions, then its winning in weakening the Turkish pressures by getting clear American bias will not mean getting rid of the subsequent presence of Turkey in confronting this privacy, and most importantly it will not mean the repetition of the same scenario on the Syrian bank, since its effectivity seems nonsexist at this level. Every bet on the Russian understanding and its considering a support of unacceptable formulas to Syria is a hasty bet because the ceiling of Russia will be drawn by the major balances where there is no place for tampering, and the ceiling of the Russian understanding is to open the door of dialogue and negotiation to reach a consensual solution.

The ideal scenario of the Kurdish leadership is to succeed individually in resolving the presence of ISIS in Syria, and to have control on the Syrian north-east areas under American support and the absence of Syrian-Russian participation. Thus the question that will be proposed on the next day will be about the fate of the Kurdish areas ad how to manage them; the speech of force is not useful in front of Russian-Syrian-Turkish-Iranian position that refuses to separate these areas militarily and security from Syria. So there will be for any negotiating solution one result: to end the special military formations and to integrate them in a certain formula under the leadership of the Syrian army and considering the ceiling of any political formula the consensus on a new constitution that is determined by a referendum, where the Kurdish will not have enough presence or alliances likely to win. The Americans will not hesitate to wage a war against Russia, Syria, Iran, and Turkey that they know that it will lead to Kurdish canton, they did not do that for something that is more important, but in case of stubbornness and going to confrontation the result will  bad consequences on the Kurdish aspiration, and a loss of everything achieved as a presence, which  if it was well employed it will lead to gains and political role in the equation of the unified Syrian country and privacies which will not affect its unity.

The Kurdish leadership knows that the ideal scenario is no longer possible, since the separating war with ISIS is out of its hands, and it became in Deir Al Zour. The battle of Raqqa has been hampered for more than a moth, so the need for the intervention of the Syrian army to resolve it has become necessary. The talk about the negation of the seeking to separate or to promote the idea of federalism is an ignorance of the fact related to a consensual negotiating solution as a form of rule chosen or refused by all the Syrians. The Kurdish leadership knows as well that this is refused by the majority of the Syrians and by the Syrian leadership in particular. Therefore the question about the following step in case the negotiation about federalism has failed is will the Kurdish leadership make separating steps or will it try to reduce the ceiling of negotiation towards a political solution that reserves the unity of Syria and achieves the available privacies under its ceiling.

Making a progress by one party has been experienced by the Kurdish leadership in the city of Afrin through an experience that revealed strange political childhood that was represented by changing the numbers of the cars and replacing them by special numbers for the Kurdish area, but in few hours there was a decision by Aleppo province to prevent the cars which do not have Syrian numbers to enter and to exit from and to Aleppo, so the Kurdish leadership was obliged to withdraw this decision within hours. This was a simple test for the availability of the reasons for the independence from the rest of the Syrian areas. The areas controlled by the Kurdish groups have Arab majority but they do not have neither economic nor geographical, nor popular basics that allow talking of such independence, especially because it locates on the borders with Turkey and Iraq and the Syrian depth, in the middle of a triangle that will not deal positively with this privacy and the boycotting will be the first reaction for the exit from the Syrian country. It knows that its electricity, the salaries of the employees, the phone networks, flour, and fuel are Syrian resources. So will the Kurdish leadership hasten to join Geneva talks for the political solution early and will it employ its military presence to exert pressure in order to coincide ending the special formations with the exit of the Turkish army from Syria and ending the presence of the terrorist formations? 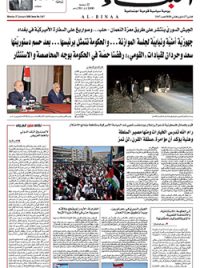