Neither the observer nor the follower of the sequence of the invitations, the attendance, and the absence which stemmed from the corridors of the preparation of Genève meeting which is dedicated for the dialogue between the Syrian government and a delegation or more of the opposition need to see the extent of the chaos which is shown by the special positions which are related to the representation of the opposition and the forming of its delegation. For a moment it seems that this chaos is a kind of missing the control in front of the American concentrated efforts to attract the opposition parties for the effective participation in this meeting, but this quick conclusion is dissipated immediately when we hear that the group of Riyadh which is the main concerned to be inquired about this chaos, did not say that it will not attend, it refused to be accused of the boycotting but at the same time it escaped from announcing the refusal of the participation  under what was stipulated by the resolution 2254, which calls to form a government of a national unity under the Syrian presidency and its constitutional powers, depending on the strict adherence to the call for a transitional governing body instead of the government and the presidency together,  having the recipe of Genève which the international resolution has ignored, thus the position of Riyadh group has become gradually away from this require in favor of the concentration on other sideline titles that it raises to the level of an escalated speech that draws question marks about the chances of holding Genève.

Today the group of Riyadh ignores any talk about the political limit of Genève especially the issue of the presidency which was throughout the four years the main title in the Syrian war internationally and regionally towards the formations that are affiliated under the title of the opposition, it has two titles in its speech, a title that is related to the composition of the negotiated delegation under the name of the opposition, and a title that is related to the technical matters that are related to the relief and a ceasing-fire which many of it was resolved without a political dialogue. The group of Riyadh has been granted the needed media and the diplomatic coverage to agitate these two points, leaving them succeed in the priority on the fundamental issue, which is the presidential issue and which is intended to be transferred from being a limit of the dialogue to the full ignorance., in order to meet some of the proposed titles and to refuse some of them, moreover to ignore them as pivotal issues, in order to be able through the first indirect round to achieve the desired from the Russian and the American  sponsors. The goal of this round is to ensure the new political limit; a government under the presidency of the Syrian President Bashar Al-Assad that has a second round of talks.

The balances which have changed in the field since the Russian positioning in the war have produced what was anticipated of them at the international level through the Resolution of the Security Council, its dedication at the practical level has made the capitals of the West at their forefront Washington stand behind the opposed formations in order to announce the cooperation with the Syrian country in the war on terrorism from the gate of new government and new Genève that need new balances of force in the field, where the group of Riyadh will lose military sites from those who have affiliated among its ranks. It is enough in this round to ensure the transition from the presidency to the government even from the gate of paying attention to the details of the negotiating delegations and the details of the relief and ceasing fire because it is an organized chaos. 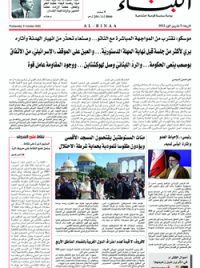