With the reach of the Syrian army and the resistance together to the first point on the Syrian-Iraqi borders the fulfilled promise is achieved by two historic leaders entrusted with the path of the nation and the resistance; the President the Doctor Bashar Al-Assad and Al Sayyed Hassan Nasrollah, they translate the fulfillment of the promise, the oath, and the slogan “we will be where we should be” since the words must be followed by deeds. Washington praises the Russian contribution in stopping the escalation and the collision in Syria after it was boasting that it drew the red lines, the matter does not exceed a statement and a drone, it said to the Great America we are in our country and in our country we are not used to have a red line drawn by others. The only red line which we know is drawn by the blood of the martyrs.

It is not important to analyze, to interpret, and to search in the considerations and the backgrounds since everything is clear. The Americans threatened and they translated their threat by raids that killed and destroyed. The title published by the channels funded by Saudi Arabia throughout day and night is that reaching the Syrian-Iraqi borders by the Syrian army and its allies from the western side, and the Popular Crowd from the eastern side is forbidden and will be prohibited by force. In the heart of Trump’s summits, Qatar’s crisis, and the attacks on Tehran’s security the message was one that the issue can be summarized with one term; do not approach from the borders line, the small announced wars in everywhere will stop, the tolerance will be possible with the holding of Astana, the understanding with Turkey will be possible, and the crisis of Qatar can be solved with less than the sabotage of Astana path which devoted Iran as a superpower in the Middle East, the threat of the separation of the Kurds of Iraq can be resized, and the ambitions of the armed Kurdish groups in Syria can be confined. But most importantly the deal with ISIS can be stopped by swapping its withdrawal from Raqqa and securing safe passages for it towards Palmyra and Badia in exchange of transferring the front of its war towards Iran and Lebanon… all of these are echoed all the day. Beware the borders line; it is a national security issue of Washington.

The implicit and the announced response to all the allies from Tehran to Baghdad Damascus and Beirut, do whatever you want, we do not fear of threats and we are not afraid of wars, we have resolved to have control over the lands of our country without any foreign barrier that asks for our identity-cards or checks our eyes and voices, or decides on our behalf when we have the right to immigrate or to make a trade, and how to announce our belonging to one concerns and one interests. The men have promised each other from Iraq, Syria, Lebanon, and Iran along with Russia which fulfilled its promise, they translated by decision what they announced in their slogan; the sovereignty in Syria belongs to Syria, and in Iraq it belongs to Iraq. What is said by the Americans is belittlement and occupation and their time has ended. The federation Russia led by the President Vladimir Putin is a state of a national independence and a relentless will. Putin said go ahead and we will support you, the strategic caliber missiles will prove that the infiltration of ISIS to Badia is a Russian national security issue and the modern Sukhoi planes in the sky of Badia and Daraa will say that the protection of the Syrian army and its allies is the basis of the position of Russia in the war on terrorism.

Now after the Syrian army reached the point in the northern of Tanf on the borders, and after the Popular Crowd reached the point in the southern of Hasaka on the borders everything has ended despite that the army and the crowd do not meet yet, there are still two hundred kilometers between them to meet across the borders. Those who were prepared by Washington to advance towards the borders and were given the air and the ground coverage and the strong statements are prohibited from moving because they are at the southern of the Syrian deployment line and at the northern of the Iraqi deployment line, while ISIS is in front of the Iraqis and the Syrians, so the opportunity to protect it by the Americans in order to protect the borders line has been lost. Since for its sake the Americans bombed and the Israelis bombed by proxy the sites of the Syrian army in Deir Al Zour, in Shuiarat Airport, in Tanf, in Damascus Airport, and in Palmyra. Between the Syrians and the Iraqis there is no US distance left, but just the distance is Syrian and Iraqi where the Americans and their tools cannot sabotage, because their red lines have been lost in the sand of Badia as their project, so those who drew this equation and their red line will say confidently the leakage of ISIS from Raqqa to Palmyra and Badia is forbidden, and it is prohibited to form a Kurdish entity in the north-east of Syria. Astana not Geneva is the framework to discuss the political solution and opening the way for those who want to get out from war to peace whether countries or groups, the unity of Syria and its national sovereignty are two inseparable conditions for the war on terrorism and the political solution, and the ones who do not want to recognize that have no place in the cooperation even if it is a superpower as America. 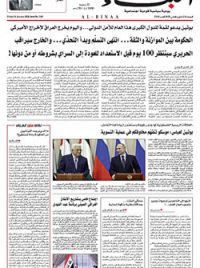