The Turkish –Iranian relationship has not been broken even at the climax of the face-to-face fighting from behind the Syrian barricades, and in the time of the Russian- Turkish confrontation, Iran and Turkey gave their common interests a priority to the issues of disagreement, but this did not prevent the fact that the ongoing confrontation in the region was a Turkish –Iranian confrontation in a way and a Turkish-Iranian cooperation in another way. The confrontation between the American project and its opponents is summarized at the level of the region with a direct confrontation that was led by Turkey in order to transfer Syria to the American bank. According to active Iranian officials, the war on Syria became possible with Turkey, but without it, it had not occurred, because the hostile Saudi discourse against Iran, Syria, and Hezbollah surpasses the ceiling of the Turkish discourse. Therefore Saudi Arabia becomes the opposite party in the dispute, because the Saudi discourse has become valuable in Syria because it is on the same bank with Turkey the closer neighboring country to Syria, the member in the NATO, and the global leadership of the Muslim Brotherhood. On the other hand, when it is the time for the settlements, Turkey goes to war within its allies in order to be the negotiator since it is the partner that represents its allies in making politics, provided through the cooperation with Iran. As Turkey perfects the rivalry it perfects the cooperation and perfects what is between them.

The US concept of the political process was to record the defeat of Syria and its allies at their forefront Iran, so it was translated through the insistence of alienating Iran away from Geneva Conference through a Saudi veto adopted by the Americans, the Secretary-General of the United Nations has committed to that and withdrawn the invitation which was addressed to Iran to attend, according to UN commitments to Russia to put Iran at the same level with the regional participated countries even alone among the five opponents; Turkey, Saudi Arabia, Qatar, Jordan, and UAE. It was clear that the change of the US concept of the political process as a framework for overthrowing the Syrian President has occurred by the forces of change in the battlefields, as it was clear that this gradual change was accompanied by a gradual shift in the Iranian role  from marginalization and the exclusion to a marginal role in a symbolic presence towards effective partnership in Geneva Conference after the Russian military positioning, the shifts caused by the Sukhoi, and the Iranian role in these shifts. But when Aleppo was liberated by the Syrian army and its allies and the launch of Astana path, Iran imposed its presence as a third partner in parallel with Turkey in exchange of international and the regional recognition of the leadership of Russia of that path.

Russia which moved from a second-class partner in Geneva path knows that the change in the field and the fall of the military projects that set in Washington and Ankara to have control on Syria have made it an acceptable peer to Washington, towards the recognition of its planned role which was translated by Astana formula. If the temporal exit from Astana coincided with the illusions of changing the military field in the invasions of Damascus and Hama after the stage of assuming the powers by the new US President Donald Trump and his strikes and the accompanied Israeli raids, then the revival of Astana path would depend on the fall of these bets either in Washington or in Ankara.

As the recognition of the Russian leadership of the political path in Syria was grasped after the reluctance and the attempts of change, the Iranian role is exposed to attempts of disrupt that want implicitly to object the presence of Turkey as an opposite partner at the expense of the Saudi ally which is adopted by Washington as a partner in the confrontation with Iran. Israel shares the objection with Saudi Arabia through the voices of the Syrian armed groups, that do not want to clash with Turkey, but at the same time they saw in its participation devotion for Iran as a reference in the solution, Turkey got a monopoly of representing officially the opposite bank of the new regional regime led by Russia, that its final balances are not stable yet, and maybe its fate will be determined in the coming days depending on how the situation will be on the Iraqi-Syrian borders which forms the compulsory passage of Iran to Syria and across it to the resistance movements. Will it be under the control of the Syrian army and the popular crowd or under the control of the Americans and the militias which they were talking a lot about their role across the Jordanian borders towards the Syrian Badiya and the Syrian-Iraqi bordered line?

Who reads the military map of the movement of the Syrian army knows that the new path of Astana and the areas of calming are not explained neither by the certainty of the political solution, nor by the confidence in Turkey in separating the armed factions from Al Nusra, but by a Syrian-Iranian-Russian plan with the resistance to resolve the situation in Badiya and the Syrian-Iraqi borders, then scene will be different on all the political and the military levels 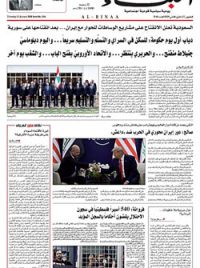