The US Secretary of State John Kerry said in a declaration two days ago that he is afraid of that the humanitarian corridors which the Russians announced are mere trick, he warned if the matter was that then Washington will stop all the kinds of the cooperation which it started with Russia according to Moscow’s understandings. What is remarkable is that the speech of Kerry did not mention the military work which enabled the Syrian army and its allies to complete the strap of Aleppo, especially on Alkestlo and Leramon as a trick, but he restricted his speech over the humanitarian corridors, while the allies of Syria were talking since the beginning of the announcement of a truce in the end of February , its provisions and what followed it of qualitative arming of Al Nusra Front and the factions that work under its banner or in contact with it, including two hundreds tanks, one thousand Tau missile, one hundred long- range cannons, ten thousands shells, in addition to the funding of hundreds of millions dollars, and bringing thousands of militants from Al-Qaeda organization across the borders of Turkey with Syria about that the Americans have cheated the Russians by the illusion of going on in understandings that aim to besiege Al Nusra and ISIS and isolate them away from the political and military scene in Syria as two terrorist organizations, they have gone one step further in asking for extending the deadlines for this purpose, till the preparations of Al Nusra have been completed with Turkish Qatari Saudi Israeli partnership and it began its attack which led to recapture Khan Touman and Khalsa in the southern countryside of Aleppo and Kinsaba in the countryside of Latakia and thus inflicting the Syrian army, the Iranian experts and the fighters of Hezbollah tens of martyrs. This dispute is still continuous despite the announcement of the new understanding, the Americans  have postponed once again due to the need of more  time to separate between what they call it the moderate opposition and Al Nusra Front, so they have exerted pressure on the Russian to stop supporting any serious military action against Al Nusra under this pretext.

In Washington the US Secretary of State John Kerry is seen as a deceived husband by the Russian Party; the Foreign Minister Sergei Lavrov through the relation which he handled with Washington. In the backgrounds of Syria’s allies Sergei Lavrov is seen as well as a cheated husband or as an owner of the illusions and dreams through the understanding with Washington which the American backgrounds are making use of him to confuse the allied front. As they talk in Washington about an exaggerated behavior by Kerry through transcending the desires’ limits which shape the policy of the President Barack Obama. Many of Syria’s allies are talking about Lavrov in a similar way. While the major facts in the policies of the US President Barack Obama and the Russian President Vladimir Putin say that the understanding between Moscow and Washington is an unavoidable that is imposed by greater data than the roles of the individuals and their desires. It is an understanding that is based on Russia’s cooperation with the Syrian country accompanied with its allies to hit Al Nusra front after exhausting the bets on it, and the revelation of the limits of its capabilities on one hand, and the depletion of the available American time for the maneuvers before the withdrawal from Afghanistan and what time is left from the current American administration on the other hand. While it seems that the understanding is logic by the Russians through first, presenting moral gain for the Americans through a partnership in an accomplishment against ISIS which they were unable to achieve through the forces which they support, second, the positioning on a new title in approaching the Syrian file entitled the war on terrorism instead of changing the regime.

Once again the talk in Moscow is about the hesitation, postponement, and semi American deception in separating between the terrorism and what they call the moderate opposition. The question becomes about the source of the duality which leads to this confusion. Whether it is a conscious policy of one of the two teams or both of them, or is it an expression of weakness of one of them in dealing with its allies, while not everyone in Washington believes the language of the tendencies and the variations in the Russian administration in their reading, or the talk about the weakness of Moscow’s ability to control the administration of its allies. Everyone in Moscow refuses to believe the inability of America in managing and controlling its allies and who is working under their sponsorship or the presence of the conflicting American movements within the administration, but the admission of what is going on among the allies on each bank as sharing of roles, in addition to the different attitudes formally of the officials in the Russian and the US administrations. So is the actual image of the scene?

Moscow and its allies agree on the bilateral of accepting those who get out of Al Nusra mantle on one hand and on a crucial fighting to cleanse the northern of Syria from Al –Nusra on the other hand. The Americans know that well, while in Washington the matter seems different, because on the time in which the US Secretary of State John Kerry announced about the understanding with Moscow three developments that cannot be separated of what is going on in Washington have been occurred. First, the sudden change of the situation of Al Nusra Front whether regarding the statement issued by the leader of Al-Qaeda organization Ayman Al Zawahri, or through the subsequent statement by the leader of Al-Nusra Front Abou Mohammed Al Joulani, and the change of the name of Al Nusra front. This surely does not aim to address the governments of Turkey, Saudi Arabia, Qatar, Israel and France, knowing that these governments have tried to make their efforts to support and to protect Al Nusra Front and to neutralize it from targeting, as it aims to address Washington by the demand and the coordination of some of the constituencies in it, in an accelerated moment to blow up the Russian American understanding which is based on resolving the legitimacy of the war on Al Nusra and who is positioning with it, after Al Nusra had refused all the proposals of differentiation from Al-Qaeda in earlier stages through the advices and efforts of Turkey, Qatar, and Saudi Arabia and a French proposal to deal with Al Nusra according to an equation that is similar to the situation of Hamas Movement through nominating a national religious movement that has some of the terrorist practices and can be adopted for the political process according to a book of conditions. Washington Post explains the statements of Al Zawahri and Al Joulani, it says that the bad directing of the differentiation has invalidated the opportunity of making use of it as many active undefined backgrounds in Washington hoped. The interpretation of Washington Post explains the words of the candidate Hillary Clinton about her intention to change the politics in Syria by putting a plan for Syria without its President whom the administration of the President Obama accepted to abandon considering his confrontation a standard of its policy in Syria. The words of Hillary Clinton remains ambiguous needs to be interpreted, except for the words of the US Minister of Defense Ashton who stood as a candidate to stay in his ministry if Clinton wins the presidency, he talked clearly about his intention to focus on the southern of Syria in the war on ISIS ignoring the war on Al Nusra. It is known the fragility of the position of ISIS in comparison of the important presence of Al Nusra there in the south of Syria, and the linkage of the presence of Al Nusra there with a vital relationship of Saudi basis across the Jordanian borders, in addition to a pivotal role in the strategies of the Israeli American security for all the formulas of the settlements and the wars in Syria. So this will be through establishing a security zone around Golan and preventing the resistance from reaching the line of engagement there. The meaning of Carter and Clinton’s words and the changes of the interrelation of Al Nusra leads to a plan of the positioning of Al Nusra under new names under the title of the war on ISIS in order to implement this mission.

The usage of weapons including the anti-aircraft by Al Nusra front in the battles of the northern of Aleppo proves an American partnership that without it, it is impossible the arrival of these qualitative weapons into the hands of Al Nusra even if the delivery was from the Saudi, Qatari, Turkish or the UAE depots as the intelligence information which is transmitted by the Russia media means after the fall of the Russia raft recently. The accusation fingers indicate that Ashton Carter the US Minister of Defense supported by Hillary Clinton as two partners continue what is started by Clinton from the US embassy in Benghazi when she ordered to deliver the shipments of the chemical weapons which were used then in the Gouta of Damascus to justify the war on Syria, which Clinton has signed the decision of going on with it as a US Secretary of State, she reached to the White House which ordered of sending fleets before it ordered of their return in order to avoid the open confrontation with Russia, Iran, and Hezbollah which was shown by the dropping of the two US test rockets off the Syrian coast by anti-missiles.

Clinton who has become the candidate of the Saudi Israeli alliance in addition to their third partner Al Nusra Front is manipulating with the Russian American understandings with what is left of Obama’s mandate through Carter, in preparation for a new chapter in the war in Syria under the title of the Afghani instead of the Muslim Brotherhood in order to raise the limit of the negotiation and to change the balances, not hoping to win the war but to search for linking its endings with ensuring the interests of the Israeli and the Saudi. 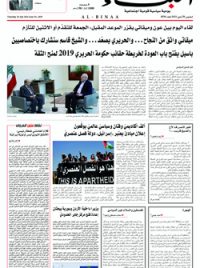