Written by Nasser Kandil,
A long time ago, Russia has depended on respecting the sovereignty in its relationship with Syria, but, many of those who belong to Washington which just humiliates its allies, insults them, and violates the sovereignty of their countries try to distort that relationship through affecting the Russian policy at different opportunities and through doubting of its intentions, trying to show it bargaining on Syria, negotiating on its unity, or abandoning some of its sovereignty. This has happened repeatedly in every stage of the war on Syria. To conclude later that the Syrian options have won since the battle of Aleppo and what did it mean in the balance of the Russian-Turkish relationships and the battle of the Syrian south and what it represented in the balance of the Russian- American and Russian – Israeli relationships towards the battles of Idlib and the desirability of the Syrian decision of military resolving of the terrorist groups despite the Turkish reservations, and as the Syrian decision of the military deployment on the northern borders against the Turkish invasion and away from bargaining with the militant Kurdish groups despite the vitality of Moscow’s relation with both.. Furthermore, politically, Moscow adopted the Syrian viewpoint regarding the institution committee, its structure, and its tasks disappointing all the skeptics.
When the relationship between Russia and Syria is based on the priority of sovereignty, the presidents become friends, allies, and partners, and where the formal and protocol details between them become not of that importance, but these details have other meanings when we talk about the American dealing with who are so-called allies, as long as he addresses them as followers who have to pay for protection as he does in the Gulf, or when he violates the sovereignty of their country, kills their leaders and guests, and bombs their forces as he did in Iraq. It is normal that Washington’s followers talk angrily towards the example of an alliance represented by the Russian-Syrian relationship, and as the Syrian-Iranian relationship which witnessed many campaigns of doubting and abuse, and as the Russian-Syrian relationship which has proven its strength and a reliable example for alliances which based on respecting sovereignty. The Iranians have fought and hundreds of them and thousands of the resistance forces who fought with them under their auspices elevated to martyrdom in Syria in order to dominate the project of the national state not the project of division, chaos, and sharing.
The Russian-Iranian relationship was and still subject to the attempts of undermining and presenting it as a relationship of two rivals in which treachery is present. The similarity of the assassination of the Commander Qassem Soleimani at the hands of the Americans after departing the Airport of Damascus and the assassination of the resisting Commander Imad Moghnieh in Syria formed an opportunity to promote rumors of the ambiguities in the position of Russia or Syria. While the Russian-Iranian-Syrian relationship is a an example of allies who are aware individually that the achieved victories by alliance are a common unfinished balance towards sharing its revenues, so every effect in the credibility of that alliance is a full destruction of all its parties. Russia which is represented by allies as an international alternative to the American role in every station shows that it gets the regional satisfaction and trustworthy relations with the parties of the conflict that Washington faces. It is willing when America is ready to depart to be an alternative that gets the international and regional consensus, and to preserve the legitimate interests of all as formulated by the international law. In Syria, maybe the Russian proposal to take over the US bases is not yet present at the hands of the US President, but the visit of the Russian President to Syria provides the opportunity, however after opening fire, Washington has to demand so, because the proposal has been withdrawn. In Iraq, the proposal is not exist, but Washington has to search for options for its dilemma before the start of opening of fire, because after that the situation will be linked to the path of confrontation.
Translated by Lina Shehade,

China and Iran: The Century’s Most Important Geo-Strategic Transformation 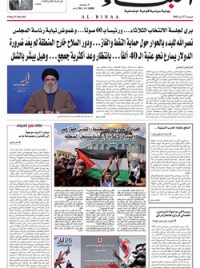