At a critical juncture coinciding with the commemoration of a distinctive historical event, Al Sayyed Hassan Nasrullah drew for Al Mukawama’s public, and through them to friends and foes, the framework through which Al Mukawama was reading the local, regional, and international scenes vis a vis her progress. He defined Al Mukawama’s perspective, her evaluation of the components of those scenes, and how they will be dealt with.

Reminding his audience of the conclusions and meanings derived from the July War’s historic victory, he reinforced memory, raised consciousness, and defined the reigning equations of the present and the future. Prominent in the new in what he said, in terms of diagnosis and position, can be summarized in two points, as can the implicit messages in what he refrained from saying.

In the explicit and clear section of his speech related to the Occupation, Al Sayyed clearly asserted the certainty of response to the air strike on Damascus Airport, based on the existent deterrence formula, and that it was only a matter of time, waiting, and anticipation of the nature and degree of reckoning the response will carry with it.  He also confirmed that the hypothesis of an Israeli hand in the Beirut Port explosion remained on the table, and negated any thoughts for an international investigation which is expected to destroy any line of inquiry which could lead to the unveiling of any truth assigning to such a hypothesis a high probability.  And in the event that such hypothesis was proven, he asked the Lebanese to ask themselves and to ask each other what positon they would take and how they would deal with it. He made clear that, on her part, Al Mukawama’s response will be certain and be unhesitant, and of the magnitude of a just punishment for such heinous criminality.

In the explicit and clear section related to Lebanon, Al Sayyed described the internal scene and revealed the plot to bring down the Lebanese State and its institutions, leading Lebanon towards a vacuum, chaos, and civil war, through the exploitation of the explosion and its catastrophic aftermath of destruction and tragedy.  He called on Al Mukawama’s public to respond to provocations with patience, and to hold on to their anger for a coming day, without specifying the arena in which it will be used. Given Al Mukawama’s insistence on the preservation of the civil peace in Lebanon, such a call opens the door for the possibility of a confrontation with the Occupation, within the context of a response, and the Occupation’s expected response to the response. Underlying such call is a principle held by Al Mukawama that any changes in the interior start with the implementation of new equations which weaken the Occupation, and through it, the American game plan.

A message  in what was absent from Al Sayyed’s speech relates to keeping the door open to foreign initiatives, at its head the French initiative, which he had described as a positive endeavor in his last speech, but did not mention in the current one. What is implied is Al Sayyed’s comfort with the new political context resulting from President Macron’s recent tweet about the West’s fear of losing Lebanon. A second message which can be deduced from what was unsaid, but alluded to in his statement that the plot towards a vacuum had been foiled, is that the preliminary steps in the formation of a new government are comforting and devoid of any danger signs in that direction.

Based on Al Sayyed’s words, Al Mukawama and her Axis have the strength and the upper hand in the area’s equations, and initiatives in all dossiers related to Lebanon would not have seen the light but for that strength.  Al Sayyed’s words imply that what had taken place, and what will take place on the battlefield and politically, reinforces the principal message from the July War: “The era of defeats has flown and the era of victories has landed.”

Al Sayyed Nasrullah’s explicit words and what remained unsaid in his discourse reassured all supporters of Al Mukawama, on a day of commemoration dear to their hearts.  They also gave gratifying responses to the big questions. 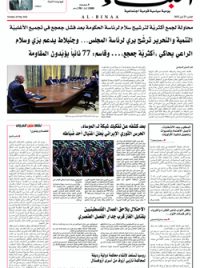