A gathering of the hypocrites leads the way of the major global and regional political events, but we can exclude from them many in this article because it does not accommodate them all, especially who is preoccupied with his troubles as the case of the Turkish President who has swore that he would pray in the Omayyad Mosque in Damascus or in Aleppo, but he did not do what is suitable for a leader or a commander to do when his plans fall and fail, or when he claims that the variables have changed his priorities and thus he explains and announces the change. Or as the one who has said that he will come to Beirut through Damascus International Airport and he pretended to have forgotten his talk, instead he has accused others of linking the Lebanese situation of what is going on in Syria. Or the who has raised the banners of Al Nusra Front as a moderation force and has called to give it security and military privileges as what he called it Nusra Land similar to what the Palestinian resistance has got in the seventies of the last century in Cairo’s Agreement and also has pretended to have forgotten and has betted that the people might forget.

Those who are present in the list of the hypocrites are not the absentness, but those who are present these days with their long tongues and glassed- eyes that do not know how to be shy, at their forefront the UN Envoy to Syria Steffan De Mistura who pretended to be weeping for the blockade that has started few days ago on the neighborhoods of Aleppo which are under the control of the militants. He knows fully that an extended blockade for years around two neighboring towns does not reduce the danger of the blockade, because those who were besieged there are maybe thousands. De Mistura said before about Daraya that the issue is a humanitarian that is not measured by the number but by the human pain. De Mistura the UN Envoy of the UN Secretary-General Ban Ki Moon to the crises know that his insistence on linking any political solution in Syria by mentioning the future of the Syrian President is an exaggerated hypocrisy, but he does not care or be ashamed if one asks him what if the Syrian President proposes to the Syrian opposition what is presented by the UN draft of the Yemeni solution which got your approval before presenting it to the National Forces there, but you know the legitimacy of the Syrian President according to the legal and the constitutional standards is present by the power of resorting to the ballot boxes contrary to the Yemeni President whose mandate has ended, you know as well that the popular legitimacy which is shown in the announced loyalties and in the cohesion of the main structure of the country around him especially the army, the diplomacy, and the administration that are not comparable with the case of Mansour Hadi who did not find neither in Sanaa nor in Aden anyone who carry a flag waiving with it or any soldier who raises his gun defending on him. You know as well that the Syrian opposition has got opportunities to have control over Syria that the Yemeni National Forces which dominated on Yemen before the Saudi invasion have not got any of them, despite the differences of the wild open borders of Syria, the external support, and the partnership of the formations of Al-Qaeda, in exchange of the siege which faces the Yemeni National Forces and the purity of their choice in confronting the terrorism. What the UN draft proposes in Yemen allows the Syrian President to say; in front of the opposition there is a temporal timetable for the solution that is based on giving the areas under their dominance to the legitimacy and on giving the weapons within forty five days, and then the search into the political issue begins, what will De Mistura say but only that he is a hypocrite?

Ould Cheikh Ahmed who works in the Yemeni file as a UN Envoy is a hypocrite as his colleague and his master De Mistura, he knows what his master teaches him, he does not wonder  what if the Yemeni National Forces say that they will accept what is being proposed to the Syrian opposition where there is a ruling regime that engages with its opponents with weapons, they share the national geography as in Yemen, but  with two differences, first is that the Syrian opposition which constitutes in its controlling areas a geography in the North and in the South through the geographic contiguity not through checking the choices and the intentions a gate for unhidden external Turkish and Saudi interventions. Second, the dominant forces on the military aspect of the Syrian opposition are terrorist organizations that got the agreement on their classification as an expansion of Al-Qaeda organization. Despite the weakness of the popularity and the nationalism of this opposition which is contested of its independence and purity, the Yemeni National Forces accept what is being presented to it, by accepting the linking of any security solution with a political one, and linking any political solution with a partnership in the rule, where it has the right of dealing with linking the fate of presidency with any circulating political solution, Ismail Ould Cheikh Ahmed will answer that he is hypocrite as his master.

The two Al Asiris the Brigadier General and the Ambassador, the first one says that Saudi Arabia is not a part of the internal conflict in Yemen and he wants from the people to believe that the war of extermination which waged by Saudi Arabia in Yemen a year ago is a war that is not related to the protection of Yemeni team that the internal confrontations proved while he is taking over the responsibility of the rule that he is without any popular support, he does not have but the Saudi invasion to impose it on the Yemenis. And this war is the peak of the intervention in the Yemeni issue, moreover the team which is depended by Saudi Arabia does not dare to utter any word on the negotiating table without Saudi royal demand, so he is just a Saudi tool. While the second Alisiri, the ambassador wanted the people to believe that Saudi Arabia does not interfere in the Lebanese Presidential affairs, but it has the same distance from all the Lebanese parties, but he himself said after the announcement of the nomination of the Deputy Suleiman Franjieh by the Prime Minister Saad Al-Hariri that this nomination has got the support of his masters in the Kingdom, before he retreated and talked about the Lebanese compatibility, while regarding the same distance from all the Lebanese parties; Was not his speech against Hezbollah at the last dinner a doubtless proof of the Saudi neutrality among the Lebanese parties?

Ban Ki Moon and Francois Hollande have heartrending regarding the safe corridors which Syria and Russia have announced after the military process in Aleppo, they refuse the principle of the corridors, and then they ask once again to set these corridors under the supervision of international observers. It is known that the issue is just about securing the supply lines for the militants which they lost them, not an issue that is related to the civilians whom the talk of Ban Ki Moon and Hollande few months ago was about securing safe areas for them on the Turkish borders, according to Erdogan’s plan for the establishment of a buffer zone. The matter did not require neither a talk about its lack of necessity and restricting the search in how to send the supplies to the trapped, nor about the UN supervision on the corridors. There is one interpretation that they are at the top of the hypocrites’ list.

Hillary Clinton the US presidential candidate talks about that she will change the plan in Syria if she assumes the presidency putting the termination of the rule of the Syrian President as a priority, she ignores that she did that when she was a US Secretary of State, she told the militants do not accept to lay down your weapons then she said that there is no danger of the terrorism in Syria, because the coming of Al-Qaeda organization is a temporal matter that will end soon. As a US Secretary of State she secured the chemical weapons from Libya to the armed groups and to Al Nusra front in particular by the US embassy in Benghazi. Thus the racing of Al-Qaeda groups and its braches to this weapon was behind the killing of the US ambassador there as was stated by the US investigations, so what is left for Clinton to do what she could not do while in Ministry  and will be provided by the presidency other than the buttons of the nuclear war? So will she do that as a president or will she like to be at the forefront of the hypocrites’ list? 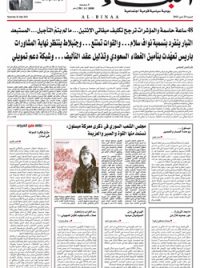