The main question which is posed by the resignation of the Prime Minister Saad Al-Hariri politically is to determine the nature of the change which it caused to the political map of the balances of forces, alliances, and trends whether in Lebanon or in the region. This is required information to understand the dimensions of the resignation and thus to understand the reasons of resignation. It is normal to start from the main targeted party publically by the resignation away from the party which decided it and formulated its statement whether Al-Hariri himself or who has dictated to him and asked him to read it in a humiliating manner to him and to Lebanon. It is clear that the main targeted is Hezbollah, which its Secretary-General Al Sayyed Hassan Nasrollah has emerged to public in a calm non-provocative image, feeling comfortable to the situation of Hezbollah, its position, its role, and its sticking to the equations and the fronts which he managed and cares about its future.

Israel and America as two concerned parties do not want to get involved by building on the resignation for what is further than the media mobilization of a campaign to target Hezbollah, and to launch bets that do not necessarily reflect considerations and plan, however, an incitement and mobilization, its content is to talk about Lebanese confrontation against Hezbollah, which means that the actual map of the balances between the opposite two fronts in the region was not affected by the resignation even in Iran and Saudi Arabia. The comments and the positions in Iran were close to analysis, interpretation, and description, while in Saudi Arabia they were close to incitement and mobilization, so there are not projects of wars or “Operation decisive storms”.

In Lebanon, the alliance of March 14th seemed in a state of confusion as the bloc of its deputies, the cautious statement of the block was dull and frustrated; moreover there is a sense of Saudi abandonment of playing with the Lebanese papers as the resignation of Al-Hariri in the speech of the Lebanese Forces. so this party tries to present the credentials to continue the confrontation, exactly as the Saudis did on the eve of the signing the nuclear program between the Americans and the Iranians, and their waging the war of Yemen hoping to restore the momentum of the US action against Iran.

The Deputy Walid Jumblatt is waiting he did not support Al-Hariri or the content of his statement, just saying that Lebanon does not bear further crisis, while the candidates of premiership have started to take the initiatives and detect the positions of the important blocks, they read the positions and the red lines limits which permit or restrict or prevent their candidacy as acceptable projects for the presidency of the government, while the Lebanese street is worried about the repercussions of the resignation, because this resignation opens the way for the terrorist forces to tamper with the security and to spread more chaos. He feels reassured for what Al Sayyed Nassrollah said, and felt reassured for what was announced by the Bank of Lebanon about not to concern about the dollar exchange rate.

The President of the Republic Michael Aoun and the Speaker of the Parliament Nabih Berri feel calm, they call on the Egyptian President to make sure that Al-Hariri is free in Saudi Arabia, so they seek for an internal calm and to cool the tension, they seek for a constitutional behavior that is built on verifying the free will of Al-Hariri of the resignation. Among the possibilities is to take time for accepting the resignation till the necessary verification of its accordance with the law and constitution, then to make consultations that end with nominating new prime minister with the cooperation of the deputy Walid Jumblatt, or to take the decision of the Speaker Berri by moving the date of the parliamentary elections forward to form a new government according to the balances which will result by these elections.

The question becomes, as long as what will result from the post-resignation will not bring but the loss to Al-Hariri, his team and his allies, so why to resign?

The answer is only in Saudi Arabia and what is going inside it as arresting and detentions towards killing in mysterious events. 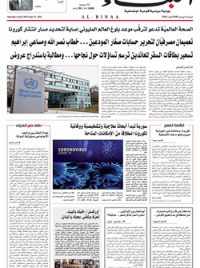