The message sent by the former Presidents of the Republic and the government Amin Gemayel, Michael Suleiman, Fouad Al Siniora, Tamam Salam, and Najib Miqati makes them subject to trial for violating the constitution, knowing that two of them have sworn to preserve and to maintain it, as they have sworn that the President of the Republic is the President of the country, the symbol of its unity, and the one who negotiates on the foreign treaties, this item cannot be restricted with the contractual financial, military, and the political mono or multiple parties-understandings, because the political statements which are issued by the Arab, Islamic, and the international summits are foreign treaties signed by Lebanon, it undertakes to abide by their content. Lebanon starts its negotiating on them through the words recited by its President at the summit. The memorandum of the five former Presidents is a negotiation on behalf of the President of the Republic, and a desire of its owners to affect what the president will negotiate through the content of his words.

It is not important to talk about the political framework of the behavior of the former presidents because it is clear, as a Saudi bullying attempt against the Lebanese President in the name of the former presidents and in the light of the inability of Saudi Arabia to enlist a position that targets Hezbollah according to the balances of the summit in which there is an Iraqi- Egyptian-Algerian axis that seeks for calm and mobilizing the capacities and the Arab and the international relationships to confront the danger of the terrorism, and the fed up with the absurd Saudi wars against Syria,  Hezbollah, and Yemen. This will mean that the memorandum is without any political value because it will not benefit Saudi Arabia; however it will affect its launchers. The President of the Republic will not be hurt after he was notified that previous formers have addressed the summit by a memorandum that says things and things to say that do you accept if I have messages from the opposing groups in your countries and recite them at the summit, the place of the oppositions are inside the constitutional institutions of their country and within the concept of sovereignty not outside it. There is no justification to falter in the words of those who bother themselves and wrote the memorandum to be read during the summit,  otherwise there will be who can read the message of the Yemeni former President Ali Abdullah Saleh. So O his Majesty the King, do you agree to ask us to support you in your war in Yemen which killed, destroyed and ruined just under the slogan of supporting the constitutional legitimacy which is short deficient?

The issue is pure Lebanese and it is so serious, so it is enough to imagine its size to wonder whether the former French President Nicolas Sarkozy will send to the European Summit a memorandum in which he precedes the words of the French President Francois Hollande  in order to affect the decision of the summit in an unfavorable way to what the constitutional and the legitimate President will ask, or if the former US President Barack Obama will send to the Twentieth Summit a message that contradicts and confuses what the legitimate constitutional President Donald Trump will ask, this is not a heresy or a  political silliness only, and it is not only constitutional and political chaos, but it is also a contravention of the concept of the sovereignty, the concept of legitimacy and democracy, and the meaning of the existence of the country and the constitution.

It is understood that that the Kings do not understand the meaning of the constitutions which they do not experience in their country, but the presidents who have known, read, and those who have sworn to protect it and those who did not know the magnitude of the crime which they are committing by making the judge between them and their President a foreign institution. They know the meaning that they are announcing a coup against the country, selling the sovereignty and violating the constitution. There is no suspicion in this issue, a complaint against the constitutional President to the Arab League as an alternative institution of the Lebanese country and its constitution which organizes the principles and the rules of the political life for those who agree and oppose, defining the mechanisms of the expression and change, so any violation of its rules or resorting to an alternative is a coup, and when the alternative is a foreign one then it is a violation of the sovereignty, and when it is an overbidding on what the president is going to negotiate upon as the foreign treaty entitled a statement of the Arab League, and if it is an attempt to negotiate instead of him, then it is a constitutional crime that worth the trial.

Hurry up to the birth of the Supreme Council to institute legal proceedings against those presidents and ministers; it seems that those are proceeding toward the dock 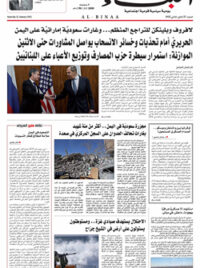