There are two main keys that allow reading and understanding the words of the Secretary General of Hezbollah Al Sayyed Hassan Nasrallah and the messages which he wanted to send on the tenth of Muharram, between statement and hint. The first one is his call to the observers, writers, and researchers to note the meaning of the rise of Husseini national transitional movement that depends on reviving the incident of Ashura as a collective platform for it. It became a renewed global cultural situation that is committed to refuse the sectarian and doctrinal strife and the project of the US hegemony. It takes Jerusalem as a collective goal, and it sees hope and devotion of Hussein’s concept in the victories of the resistance. While the other key is to put the role of Hezbollah and its resistance in the heart of the region’s crises as an decisive factor that cannot be intimated or neutralized under the title of confronting the US project, overthrowing the Israeli aggressiveness, and making them the base for understanding its regional and Lebanese perspectives and an explanation of its role in the battlefields.

These two keys involve accepting the idea of considering the project of the resistance as it is in its ascendant stage which is reaching its advanced stages regionally and wants to balance its gains, and as it is in the process of its universality and the stabilization of its concepts and dimensions from culture to politics as what happened in Lebanon for more than thirty years ago when the reviving squares of Ashura turned into bases for launching the resistance. This means that everyone who understood from some details of Al Sayyed’s speech the meaning of the call for calming and built his wrong conclusion as a response to the impacts of pressures, will fall in illusion and suspicion, because the calming in the battlefields does not serve the confrontation in which resistance project is present, because many things will be drawn in arenas for the next stages.

Al Sayyed put a joint framework for the paragraphs of his speech entitled “What has been achieved”. In Syria, through ensuring the end of the war, and the recognition of the victory of the Syrian country under the leadership of its president and army. In Iraq, through establishing a political constitutional structure that prevents the penetration of the resistance’s project enemies. In Yemen, where the steadfastness is, and where the project of the resistance breaks the Saudi arrogance which is based on the US encouragement. And in Palestine, through making use of the revenues of US project dedicated to overthrow the Palestinian cause through developing the project of the resistance and unifying the Palestinian positions under a broad title “the uselessness of negotiation choice and the fall of the settlement project”.

The current crucial mission of the resistance project according to the speech of Al Sayyed Hassan Nasrallah internationally, regionally, and in Lebanon is to destroy the legend of the Israeli Air Defense as the last source of illusion which causes the Israeli aggression, the US arrogance,  and the joining of some Arabs. The project of the resistance which won in destroying the occupation capacity and imposing the withdrawal, has won in destroying the legend of the navy, tank corps and infantry corps in the War of July 2006, and has won in distorting  the US and Israeli intelligence services and their regional and international allies in the wars of Syria and Iraq against the organizations generated from the Wehabbi thought, but the distortion of the image of the Air Defense remained a compulsory passage  for keeping Lebanon safe against the dangers of aggression, and a current mission to end the unbearable and intolerable situation due to the repetitive Israeli attacks on Syria. What can be done by the resistance in confronting them is to distort the image of the Israeli air superiority which seems crucial in the speech of Al Sayyed Hassan about the project of the resistance which is related culturally and ethnically to the global Husseini march where the compass was and will remain Palestine and Jerusalem. 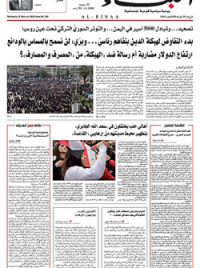