Within months after Moscow Meeting which brought together Russia, Turkey, and Iran after the liberation of Aleppo which was the outcome of the Syrian-Russian-Iranian cooperation with the resistance the region especially Syria has witnessed a series of developments closer to the major tests of the major choices in a way that focus on the issues which the decision –maker needs before putting the record straight.

The new US President who has waged his electoral campaign has been tested under the titles of the war on ISIS and the cooperation with Russia. It seemed away from explaining the reasons that when the anticipated cooperation with Trump’s administration takes place, it would be conditional on the two equations of the balances of the ruling forces in Syria in favor of Russia and its allies on one hand, and the controls which will be put by the decision-maker of the US field in the Pentagon and the intelligence on the other hand. It became fixed that the hesitation and the confusion will characterize the situation of the new US administration, as well as the inability to proceed with a smooth cooperation with Russia as was suggested in the slogans of the electoral campaign, but the cooperation with Russia is no longer possible but to be a bitter indispensable fait accompli till it becomes available in politics. The decision-makers centers are controlled with the Russophobia, they try to behold this cooperation despite it is a US need conditions that are not accepted by Russia as having a role for Israel in the security of Syria, resizing the relationship with Iran, and weakening Hezbollah.

The possibilities of the strategic cooperation with Turkey have been tested in the light of their bad bet on the military option, as was seemed through the Turkish preparation by apologizing from Russia and the seeking to restore the relation with it, in addition to depend on the option of the Russian-Turkish-Iranian cooperation after the liberation of Aleppo to make a new political path in Syria starting from Astana path and away from the fate of the Turks. The tests showed that there were no strategic shifts in the Turkish performance despite the succession of the disappointments from the battle of Al Bab which did not achieve its goal through the US barter that paves the way for the Turks to enter Manbej and Raqqa in exchange of having control on the Kurds or through what they are doing by disrupting the path of Astana and driving the affiliated factions of them to a crazy war behind Al Nusra front, and within Saudi-Israeli considerations.

Israel which hides behind the US policies and the Saudi Turkish alliances has lived the test of respecting the controls and the red lines with Russia, it seemed absurd, ready to take an adventure, infiltrating behind the US aircraft which attack Al-Qaeda sites in the western of Aleppo to target sites of the Syrian army in Palmyra in order to delay the arrival of the Syrian army to the banks of the Euphrates and to give a push to the leaders of the collapsed armed groups to tell them that you are not alone, exactly as the US raid on Deir Al Zour which targeted sensitive sites of the Syrian army. Simply Israel neither took into account the symbolism of that raid, knowing that the Prime Minister of its government has already ended his visit to Moscow, nor it took into account what he has heard from the Russian President, so this put the Syrian Israeli confrontation on the brink of war.

Saudi Arabia did not receive the messages of Moscow and Tehran to proceed to the dialogue and the political solutions, it is still supporting Al Nusra front and betting on the manipulation with the Syrian balances. Despite the warnings of the dire consequences it proceeds in the war of destruction in Yemen, it engages into stupid bets to encourage Washington to take more adventures, furthermore it ignored the messages of Moscow through Cairo and Amman about the call to normalize the official Arab relationship through the Arab League with Syria in order to reserve an Arab seat in the next Syrian settlement.

The strategic conclusion which will be on the table of the first international leader and the first regional leader  is that the arena is not ready yet for the settlements on one hand, and on the other hand what has been achieved through the battles and the victories and the deterrent military presence in Syria are not enough to achieve the needed level of rationality from the international and the regional players to make needed controls, and that there must be a military deterrence presence in the field to wage a new test to discover the readiness for the serious political engagement.

It is a coincidence that this anticipated summit has been preceded by summits, but the Russian President has met the Turkish President and the Head of the occupation government in order that the Russian-Iranian summit will be the best summit. 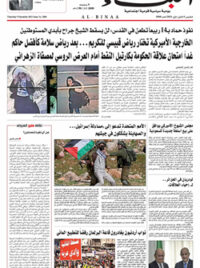